A woman who police said threw her own urine on a Metrobus driver over the weekend was arrested Wednesday.
Listen now to WTOP News WTOP.com | Alexa | Google Home | WTOP App | 103.5 FM

WASHINGTON — A woman who police said threw her own urine on a Metrobus driver over the weekend was arrested Wednesday.

Metro Transit Police arrested 38-year-old Opal Brown shortly before noon Wednesday after they said she tossed a cup of urine on a Metrobus driver Saturday evening.

Police say cameras on the bus captured her relieving herself into a cup toward the rear of the bus and then walking to the front of the bus. When the bus arrived at the stop for Minnesota Avenue and Benning Road in Northeast D.C., police say Brown reached around the driver’s plastic shield and dumped the liquid.

Brown then fled the scene.

The driver went to a hospital for “decontamination,” although she wasn’t injured.

The local Amalgamated Transit Union says Metro should do more to protect drivers. Metro said its cameras and protective shields are “intended to help protect bus operators from assaults.” 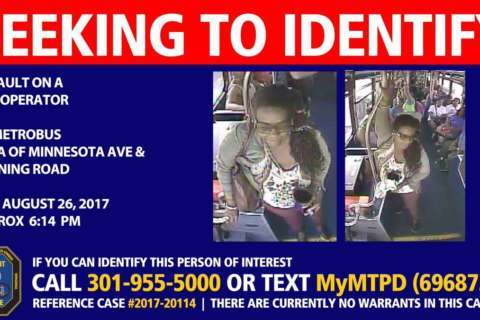