An argument over a craps game led three men to shoot at each other last week, hitting a 1-year-old boy, according to court documents.
Listen now to WTOP News WTOP.com | Alexa | Google Home | WTOP App | 103.5 FM

WASHINGTON — An argument over a craps game led three men to shoot at each other last week, hitting a 1-year-old boy, according to court documents.

Witnesses told investigators that 39-year-old Derrick Damon Watson and another man were playing craps, surrounded by neighbors and their children on July 10 in the 1300 block of I Street NE, according to court documents.

An argument broke out between the men, and Watson went to his Volvo to retrieve a gun, the documents state. The other man returned with a gun and with a friend who was armed and the three exchanged gunfire, according to the documents.

In the middle of this sat 13-month old Jeremiah White, who investigators say was shot. The boy was injured in the buttocks, thigh and hip and is recovering at the hospital.

D.C. police arrested Watson of Northeast D.C. early Tuesday morning, Police Chief Peter Newsham announced at a Tuesday news conference. Watson has been charged with assault with a dangerous weapon and unlawful possession of a firearm. Watson has prior offenses for “disorderly-craps” and drug charges, according to court documents. 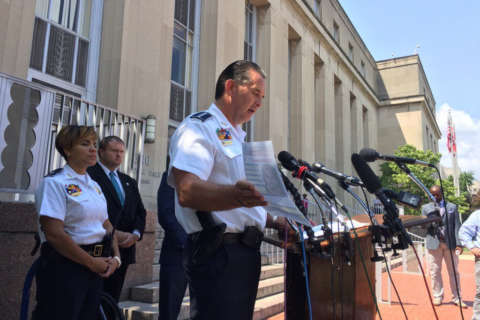