Thousands turn out in DC for Tax Day protests

They chanted “we want to know” and shouted for the release of President Donald Trump’s tax returns.

“If you don’t release your tax returns, we have no way of knowing whether you’re putting America first or you’re putting Donald Trump first,” said Rep. Jamie Raskin, D-Md., during a speech.

Another call for action from those who gathered was tax reform “that demonstrates that you’re working in the people’s interest, not your interest,” said Sen. Ron Wyden, D-Ore.

Wyden called on Trump to “knock off the secrecy” and said people have “a basic right to know whether the president pays his fair share.”

One of Trump’s sharpest critics in the House spoke to protesters at the U.S. Capitol just before they set off on a march to the National Mall.

Democratic Rep. Maxine Waters, of California, said there’s nothing to prevent Trump from releasing his income taxes and that “the simple truth is he’s got a lot to hide.”

“If he thinks he can get away with playing king, he’s got another thought coming,” Waters said. 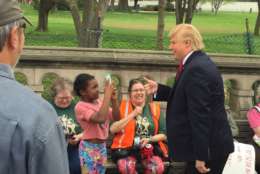 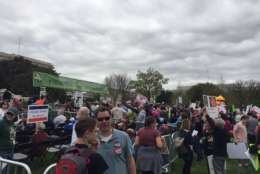 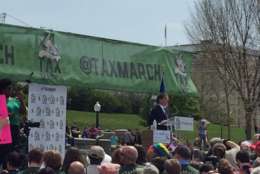 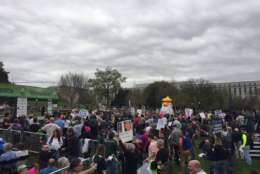 At the end of the speeches, protesters marched past the president’s Pennsylvania Avenue hotel — as well as the IRS building.

Trump, who spent the morning at his Florida golf course, avoided several hundred protesters when his motorcade took a circuitous route back to Mar-A-Lago, his Palm Beach, Florida, estate.

Protesters marched across the bridge that divides West Palm Beach and Palm Beach, chanting and hoisting signs that read “Don the Con,” ”Go back to New York,” ”Show your taxes!” and “Show me the money!” 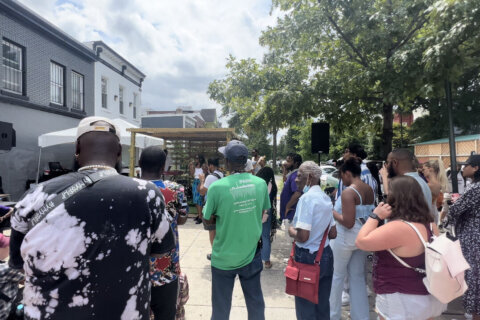