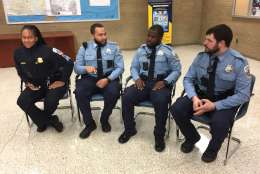 WASHINGTON — Video footage from a D.C. police officer’s body-worn camera captures the rescue of a man from a burning vehicle on Monday night.

A driver crashed in the 1500 block of Bladensburg Road in Northeast at about 10:20 p.m. and when police arrived, the car was on fire. The responding officers reached into the smoke-filled car and dragged the injured driver to safety.

“I guess I’ve seen too many movies, because I’m thinking the car’s going to blow up the whole time,” Officer Steven Hines said Tuesday as he and three other officers spoke about the rescue. The footage released is from his body-worn camera.

“It was our duty to react quickly to make sure no one else was in that car,” said Officer Jacoby Taylor. “We reacted quickly together as a team.”

Sgt. Nicole Brown, the officers’ supervisor, said the driver is very lucky Hines happened upon the scene when he did, saying, “If he had arrived even maybe two to three minutes later, it would have just been too late.”

Brown said the officers’ response was top notch. “It was amazing. It was definitely heroism at its finest,” she said.

Officer John Hayes added, “We helped save somebody, which is what a lot of us signed up to do this for, to help people. I’m very proud of the work we did.”

Emergency crews had transported the man from the burning car to an area hospital where he was treated and released. Police have not released information about the nature of the injuries or what caused the crash.