DC’s Trump Hotel continues to be site of protest, support 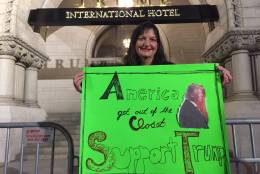 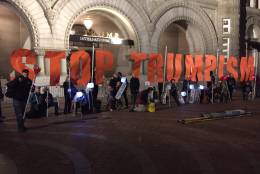 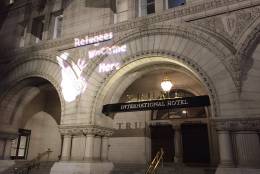 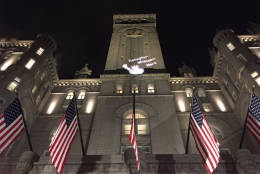 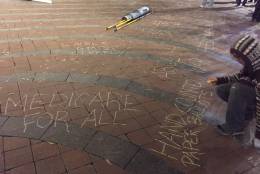 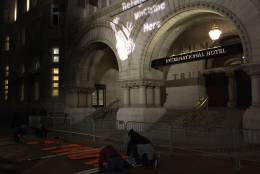 WASHINGTON — Nearly a week after Donald Trump became president-elect, his namesake hotel in D.C. continues to be a place where people gather to share their views on the unprecedented election.

A group of about 30 protesters arrived carrying glow-in-the-dark torches and pitchforks Monday night, and earlier, a lone Trump supporter carried a handmade sign.

Protesters unfurled a huge sign that read “Stop Trumpism” and projected large images onto the hotel’s facade. In contrast, Kathleen Arthur stood alone in front of the hotel before their start, with a sign that read “America Get Out of The Closet Support Trump.”

Several people walking by stopped to talk and take photos with her.

“We voted for him, he is our president and in my opinion, we need to get behind him because he needs us,” Arthur said. “I think that he is a very good businessman, but he doesn’t have any political experience per se, and he’s going to need to be surrounded by good people to make good decisions.”

Arthur says she supported Hillary Clinton in 2008 but has since changed her mind about the former Secretary of State.

“America has been reset with Donald Trump and bottom line — the playing field is open. We can start changing things. We can make a better America,” she added.

On the other side, the peaceful protest was organized by the group Popular Resistance, and Dr. Margaret Flowers is co-director.

“This election was really a statement against the political elites … and we’re standing up now and setting a people’s agenda because we know that we’re not going to get the changes we need, if we stand by and be complacent,” she said.

Flowers was also the Green Party candidate for the open U.S. Senate seat in Maryland that was won by Democrat Chris Van Hollen.