Coronavirus News: Fairfax Co. votes to increase substitute teacher pay | Is it time to get a COVID-19 booster? Which one? | Local cases of COVID-19 | How many in DC region are vaccinated?
Home » Washington, DC News » Protest snarls intersection in…

A protest in front of the D.C. offices of the Fraternal Order of Police has led to the blockage of an intersection in Northeast.
Listen now to WTOP News WTOP.com | Alexa | Google Home | WTOP App | 103.5 FM
(1/4) 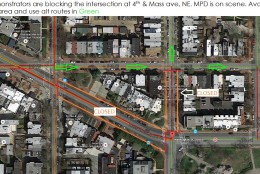 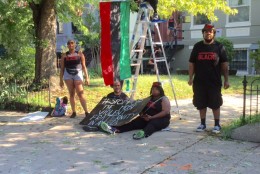 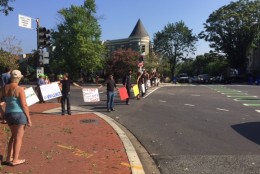 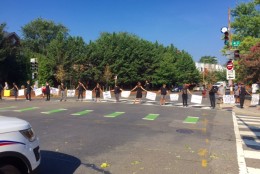 WASHINGTON – A protest in front of the D.C. offices of the Fraternal Order of Police led to the blockage of an intersection in Northeast on Wednesday morning.

Demonstrators chained themselves to ladders and railings in front of the building at 328 Massachusetts Ave., Northeast. Clarice McCants, a spokeswoman for the protesters, says the demonstrators represent Black Lives Matter DC, BYP100 and affiliated groups.

“This office is very hidden; no one knows what it is,” McCants said Wednesday, but she calls the police union the force behind measures such as a Blue Lives Matter bill, which provides the possibility of charging those who kill officers with hate crimes.

The protests continued throughout the day Wednesday but is no longer impacting traffic.