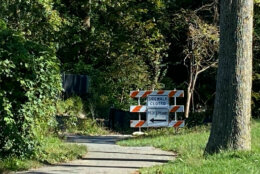 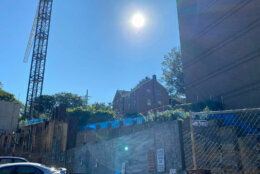 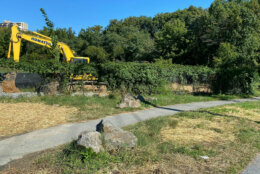 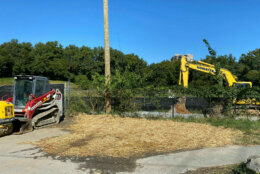 With the Purple Line project on pause right now, there’s a series of construction scenes sitting half-finished around Prince George’s and Montgomery Counties.

Residents who live in Silver Spring and Bethesda got a chance to talk with the state’s project director about what their more immediate concerns are as the state tries to sort out what the next steps will be, now that the contractor, Purple Line Transit Partners, quit the project.

For now, the state is moving forward with plans to get the project back on track, and while it’ll be up to six months before construction is at full-go again, project director Matthew Pollack said some work will resume again later this month, once PLTP gives up control of the sites.

Just north of the intersection of East Wayne Avenue and Sligo Creek Parkway, the transit line’s only tunnel remains in mid-construction, though the crane that towers above it is set to come down in the coming days.

“Residents in this community particularly have endured nearly two years of blasting and drilling at all hours of the day,” said Montgomery County Councilman Evan Glass. “So while there might be some respite from that now, the remnants of it still exist, which doesn’t make them any more happier.”

The questions from residents who joined the tour targeted things like utility work, bus stops and parking spots at apartment buildings adjacent to the tracks.

“Just in the two blocks that we walked, a number of sidewalks have been broken, we’ve seen open pits and we just need to make sure everybody is safe when they’re walking around,” Glass said. “I just want to make sure no one is injured, God-forbid anyone is killed by any of the construction that’s left over, and that’s what this walk is about.”

For Pollack, it was a chance to reassure residents that the project is a priority and that work will finish despite the delays. And it gave residents a chance to let him know how their lives have been disrupted, and where they’ve been ignored in the past.

“We’re learning more about what the community’s needs are,” Pollack said. “We need to hear from them directly to understand where we can take steps to move beyond what is safe and protected and try and increase convenience wherever possible.”

While the state sorts out how it’s going to move about getting the project started again — whether that means joining with another private partner or taking on the project in its entirety — construction planning is continuing. Pollack also told residents that several of the subcontracts that had been involved in the project have made clear they want to continue working.

And in fact, some work will resume again later this month.

“It won’t be to the same degree where you could walk to any site along the alignment and see construction happening,” Pollack said. “We have to work within our limits and we’re going to start small and be comfortable with our capabilities before we expand.

“We’re going to start in a few places with construction but then you should see it expanding,” he added.