A long-planned self-driving shuttle is set to launch in Fairfax County, Virginia, marking what could be the first autonomous shuttle for public use on public roads anywhere in Virginia.
Listen now to WTOP News WTOP.com | Alexa | Google Home | WTOP App | 103.5 FM

A long-planned self-driving shuttle is set to launch in Fairfax County, Virginia, marking what could be the first autonomous shuttle for public use on public roads anywhere in Virginia.

The low-speed shuttle will run in the middle of the day to provide additional Circulator-type service between the Dunn Loring Metro and the Mosaic District, Virginia’s head of transportation innovation Cathy McGhee said Tuesday afternoon.

The shuttle could start running as soon as the end of this year, but there is no hard timeline yet, so commuters may not be able to ride until sometime in 2020.

Fairfax County’s Department of Transportation plans a rollout of the program Wednesday morning, with the support of Dominion Energy, after $250,000 in operating grant funding is formally approved by the Commonwealth Transportation Board as part of broader state transportation funding plans.

Dominion will purchase or lease the vehicle that would be operated by the county, under an agreement expected to be approved by the county’s Board of Supervisors later this month.

The company is about to release a request for proposals seeking pricing to either lease an autonomous shuttle for a year or to purchase the vehicle, said Dominion Vice President of Innovation Emil Avram.

“It really depends on the bids we get back … as to the lead time,” Avram said. “We’re anticipating that it could be sometime in the late fall of this year.”

If Dominion buys the vehicle, it still could be moved to a different part of the county or state at the end of a one-year trial.

“Part of this is testing the public feedback, what kind of ridership are we getting as we deploy this, how does the technology work in different circumstances, different weather conditions, different scenarios,” Avram said.

The exact route the shuttle will follow is still to be determined, and it could even stretch as far as Inova Fairfax Hospital.

“The vehicle will need to be programmed and trained for the route that it’s going on,” Avram said.

At the end of each run, the vehicle would take itself back to recharge. Fairfax County will pay for that electricity and any other maintenance.

The Fairfax County bus would be the first state-funded autonomous electric shuttle for public use in Virginia, and the first to run on roads that are open to the public.

If there are no problems with federal National Highway Traffic Safety Administration approvals for a vehicle that does not meet the usual car safety guidelines (such as having a steering wheel), the shuttle could be running within the next year, with the potential for several stops along the route.

A Dominion Energy presentation to the Fairfax County Board of Supervisors Economic Advisory Commission notes the company began as an electric streetcar company, and supports electric-autonomous shuttles as opposed to gas-powered ones, not only due to the obvious direct interest in electricity but also because it could be better for the environment.

Also on Wednesday, a formal ribbon cutting is scheduled for the self-driving shuttle on base at Joint Base Myer-Henderson Hall in Arlington.

A similar shuttle is running in part of National Harbor in Maryland. 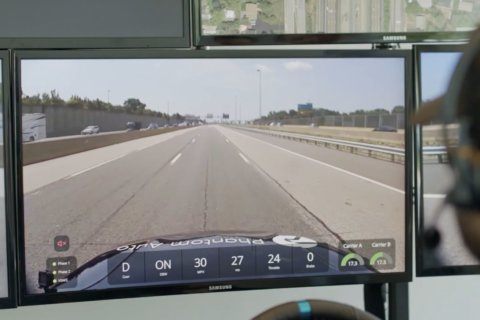 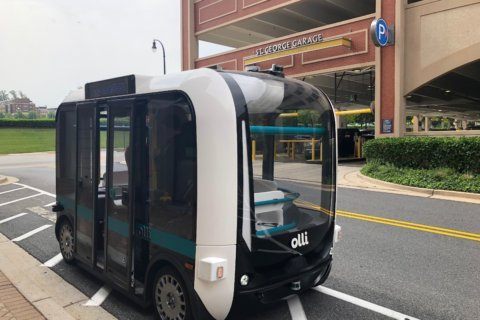