Self-driving cars have promise: a significant reduction in deadly crashes. But the cars do not really exist yet and still face significant questions about security, ownership and how people and regular vehicles interact with them.
Listen now to WTOP News WTOP.com | Alexa | Google Home | WTOP App | 103.5 FM

WASHINGTON — Self-driving cars have promise: a significant reduction in deadly crashes. But the cars do not really exist yet and still face significant questions about security, ownership and how people and regular vehicles interact with them

“We are seeing where people are maybe misinterpreting the technology,” National Highway Traffic Safety Administration Chief of Trends Analysis Will Godfrey said. 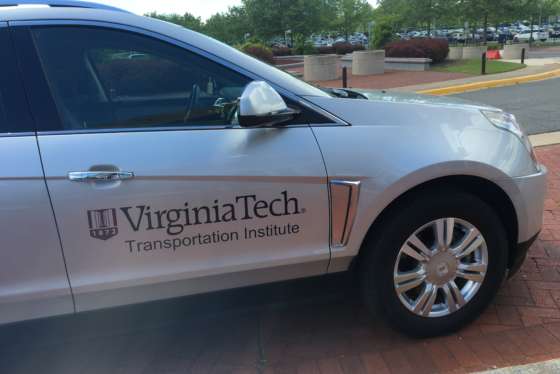 Self-driving and connected cars are out on the road with regular commuters in Northern Virginia, and experts say this technology will change the auto industry, cities and even the organ donor program.

Current cars available are at most a level two on a one through five scale of autonomous technologies, and some of the most advanced cars available now are being tested in the real world, including in Northern Virginia. Even assuming the technology does gain widespread acceptance though, many experts believe true autonomous vehicles will not fully take over the roads for decades.

It is easy for drivers to get confused between features like lane departure warning that alerts a driver a correction needs to be made, and lane control assist that actually keeps the car on track when it senses a driver allowing the car to drift.

Godfrey spoke at a Northern Virginia Transportation Authority roundtable last week, co-hosted by the Intelligent Transportation Society of Virginia. He said some studies suggest traditional cars drift out of their lanes once every 2.7 miles on average,

In more than 90 percent of fatal crashes today, driver error, or miscalculation, is blamed.

“It’s going to help lessen the greatest factor [in crashes], and that is the driver behavior,” Godfrey said.

Other autonomous technology meant either to be used for primary operations, or as a backup, has failed at times in the past though, like Metro’s Automatic Train Operation system, which was turned off after a 2009 crash.

“Even though some incidents will occur with this new technology, it’s still better than where we’ve come from. We did that with electronic stability control, we did that with anti-lock brakes,” Godfrey said.

Decades of transition have been difficult

Since the earliest self-driving technologies are on the road now alongside traditional cars, many manufacturers are focusing on self-contained vehicles that can handle any situation.

“There is this in-between space that is really, really hard,” said Michelle Chaka, of the Virginia Tech Transportation Institute.

The group is among those testing both the technologies, and how people in the cars and outside of them respond.

Car companies will need to educate people using the cars about what the technology can and cannot do, she said, since people are unlikely to read all the manuals.

John O’Donnell is the President and CEO of the Washington Area New Automobile Dealers Association. He said Maryland considered requiring dealers to teach car buyers about what they were really getting, but his group pushed back on that.

The dealers association was concerned whether owners would pay attention to the instructions, and whether the dealers could be held liable in a crash.

For years, drivers may have to ask questions every time they borrow, buy or rent a car, NHTSA’s Godfrey said.

“There are going to be decades in which we have a mixed population of manually driven vehicles as well as fully autonomous,” Godfrey said.

Even though the transition will not be easy, many believe that autonomous vehicles can provide great benefits. For example, advocates in the trucking industry think communication between vehicles and roadside infrastructure could create a train of trucks on the interstate that follow one another.

Some people may be looking forward to self-driving cars, but in practice, they say the cars do not drive the way they would, making the experience of riding in one uncomfortable.

“The early driver behavior, driver reaction, has been ‘the following distance is too great. People cut in front of me, then the vehicle slows down … it does not drive the way I would drive’,” Godfrey said.

While that enhanced safety may be part of the point, some people with the new cars are already trying to adjust the technology to push the cars over the speed limit, or to reduce following distances. The changes are similar to legal adjustments to normal cars that are sold compliant with emissions rules.

“There are folks that get their Tesla, they get their high-end Cadillac with adaptive cruise, and they want to say ‘I want to tune this to drive like I do,’ so you see more people wanting to basically make the car drive a little bit more aggressively, not maybe the other way which would be a greater benefit for us all,” Godfrey said.

Since the cars are essentially computers on wheels, they do face cybersecurity threats.

“We have had just a very small handful of incidents reported to us of a cybersecurity threat and, so far, if it wasn’t in a lab environment, if it actually happened in reality, the person had to gain access — physical access — to the vehicle,” Godfrey said.

The federal government puts security responsibility on the vehicle manufacturers, but in one case, the gas, brakes, steering and infotainment system could be totally controlled by accessing the car’s USB port meant to allow users to upload music.

“It didn’t have any safeguards to just allow you to contact the infotainment module, it allowed you to get on the network and then start injecting false commands to lower the window, increase the volume [and more],” Godfrey said.

The Department of Transportation is treating problems like this like any other serious safety issue, which is handled through a recall.

Some recalls, however, can take years to address.

Data is key, but might not belong to you

When a car with self-driving features crashes, the driver may not always be able to get the equivalent of “black box data.”

Some car companies collect ongoing data about users, while other companies treat a car that has been sold as totally the property of the owner.

As the car manufacturers, suppliers of automated technology, insurance groups, people hurt in a crash, police, and governments debate who is liable in an incident, access to the data could be a sticking point.

Today, the cars usually lock in gas, brake and speed data when a car’s air bags deploy. Near misses are not usually recorded.

A 4-year-old laptop or 2-year-old smartphone can be exceedingly slow. So could the same issues crop up in a car that’s more computer than combustion engine?

Down the road, fully autonomous cars could even take themselves to the car wash if their sensors are starting to get dirty or to a mechanic if there is another issue.

The check engine light may no longer be something owners have an option to ignore.

“Many of [the manufacturers] really understand what kind of durability things they need to put in place to make these systems last so I can have an 11-year-old car,” Chaka said.

Questions remain about whether the car’s owner would be responsible if sensors had problems that caused a crash.

“We’re going to have to think about enhancing that to ensure that everything is calibrated properly and that all of the systems are working or at least are identifying to the operator that it needs to be checked out,” Godfrey said.