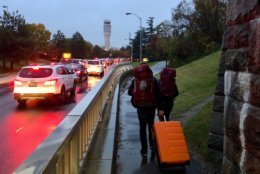 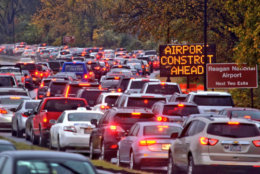 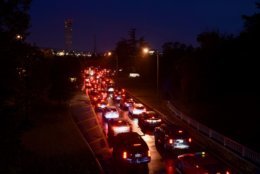 WASHINGTON — Travelers heading to Reagan National Airport Friday afternoon and evening were seeing red — literally. The messy combination of wet weather, airport construction and a four-day shutdown of the Metro stop that services the airport led to a sea of brake lights on the George Washington Parkway as traffic inched through extreme delays.

Major backups were reported on the George Washington Parkway and Route 1 Friday afternoon and continued through the evening.

⚠ Traffic is gridlocked at the airport due to @wmata’s shutdown of 2 stations, including ours. Metro’s free shuttles are also facing long wait times. We apologize for any inconvenience during this regional traffic issue. Passengers should leave extra time coming to the airport.

Delays on the GW Parkway heading southbound backed up all the way to the Memorial Bridge, according to the WTOP Traffic Center.

WTOP Traffic Reporter Bob Marbourg said the heavy traffic around the airport was among the worst he’s seen. There were reports of would-be airline passengers jumping out of cars on the southbound side of the parkway and running across the northbound side, presumably to catch flights. WTOP’s Dave Dildine said he saw travelers “bailing out of cars on foot and rushing to departures dragging suitcases behind.”

Metro passengers were also treated to a frustrating commute.

The Crystal City and Reagan National Airport Metro stations on the Yellow and Blue Lines are closed through the end of the long Veterans Day weekend for maintenance. The closure was well-publicized, although many travelers took to social media to vent their frustration about both the shuttered service and the long waits for shuttle buses.

The traffic headaches were expected but still seemed to catch many drivers off-guard.

Traffic around the airport “is an ungodly mess,” one Twitter use wrote earlier Friday afternoon. “45 mins and counting from passing the waiting lot en route to the departure level.”

Airport authorities had been expecting the roads near the airport to be more congested than usual this weekend, with more travelers driving to the terminals instead of taking Metro.

“We at the airport recommend that passengers drop off and pick up their friends inside our terminal parking garages. They’re free for up to 60 minutes,” said airport spokesperson Rob Yingling. ‘

During similar Metro closures, long backups have formed at times on the George Washington Parkway and Route 1 in Crystal City.

Yingling urged airport travelers who are arriving late in the evening to consider picking up passengers on the upper level. “If they’re coming in on a flight after 8 p.m. the ticketing level roadway is often pretty quiet at that time,” he said. 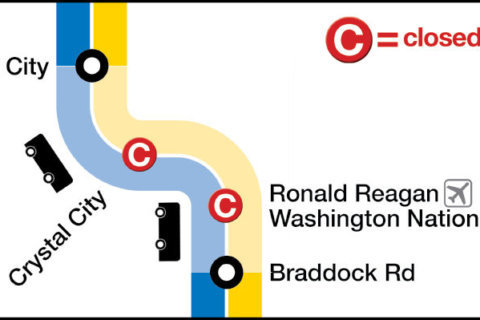 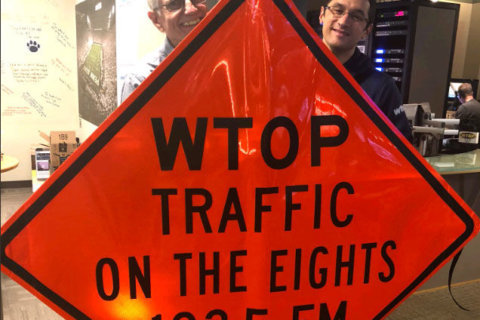 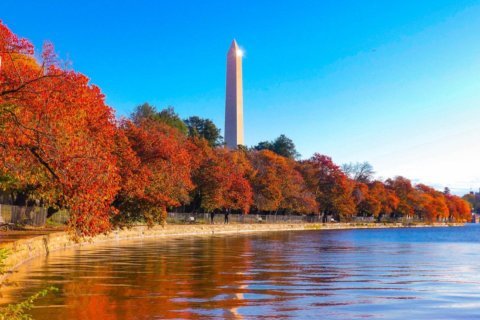