Chain-reaction crashes close I-95 in Stafford Co. for hours

At least two tractor trailers were involved in a series of multi-vehicle crashes Tuesday, leaving at least four people injured and snarling traffic in Virginia along I-95 and Route 1 in Stafford and Prince William counties for hours.
(1/2) 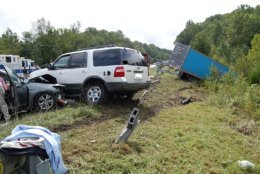 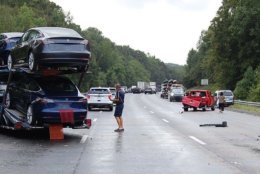 WASHINGTON — At least two tractor trailers were involved in multi-vehicle crashes around noon Tuesday that closed the southbound lanes of Interstate 95 in Stafford County, Virginia.

The results of the crash investigation were not immediately available. VDOT announced shortly after 4:30 p.m. that all southbound lanes of I-95 reopened, but major backups remained well after the usual rush hour, especially along Route 1, which served as the primary detour during the hours-long closure.

The area where the crash happened:

Get the latest road and traffic conditions at the WTOP Traffic Center.