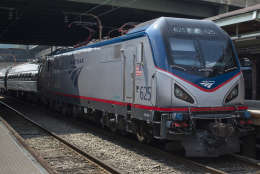 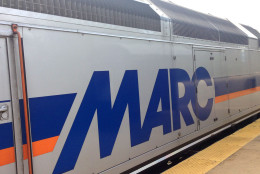 This is the final story in WTOP’s series, Crumbling Capital, scrutinizing the decaying infrastructure in the D.C. region and what’s being done to fix it.

These are just a few of the challenges straining the region’s aging rail system. They slow commuter, passenger and freight trains, and ultimately put more traffic on the D.C. area’s overtaxed roadways and bridges, which also lag behind on investments.

Trains are now rolling on a new track as they travel from the Virginia Railway Express station in Spotsylvania, which opened a year ago. And just last week, freight trains began rolling through the Virginia Avenue Tunnel, which is being expanded in D.C.

But elsewhere, trains regularly run through century-old tunnels and along bridges that need major repairs or are due for wider, modern replacements. And thousands of Maryland and Virginia commuters ride daily on tracks that lack new safety technology designed to slow or stop speeding trains.

Installing the technology, known as positive train control, is just one of the many improvements awaiting the region’s rail system.

Railroads must install the safety technology by 2020. (They can receive a two-year extension if they can demonstrate progress toward adding the controls by an earlier 2018 deadline.)

“According to the [Federal Railroad Administration’s] database, the No. 1 cause of rail accidents is human error, and the NTSB has seen countless accidents that have been PTC preventable,” said Bella Dinh-Zarr during a meeting of the National Transportation Safety Board about the Amtrak train crash in Philadelphia that killed eight people.

NTSB officials have said that positive train control would have prevented the 2015 derailment. Eight people were killed when an engineer lost track of where he was and accelerated around a curve, sending the train flying off the tracks.

Since the Philadelphia crash, Amtrak has activated positive train control along the Northeast Corridor tracks. But the safety system is still not in place on three-fourths of commuter rail tracks nationwide, and an even higher proportion of freight rail tracks lack the protections.

The tracks used by MARC and VRE trains also are missing the safety system. Norfolk Southern and CSX own most of the tracks that the local commuter rail systems use.

Amtrak is also working to address another more recent crash in Philadelphia. In April, an Amtrak train plowed into a backhoe after a series of communications failures put it on the wrong track. Two workers were killed.

Choke points due to outdated tunnels, bridges and a lack of tracks along the rail network also cause delays and limit the number of trains that can use the tracks.

The most significant choke point locally is the Long Bridge, which carries train traffic over the Potomac River between Virginia and Downtown D.C.

The District’s planned improvements for the Long Bridge may be the “most needed one of all” planned rail projects in the area, said Virginia Transportation Secretary Aubrey Layne.

D.C. is working with CSX to add more tracks across the river. The current two-track bridge near Reagan National Airport dates back to the 1800s. The project is expected to help reduce rail congestion in Northern Virginia.

On tracks owned by CSX or Norfolk Southern, taxpayers often pay for or support additional tracks and other improvements that are then owned by the host railroad in exchange for an agreement for a certain number of passenger train slots. And cash to modernize the region’s crumbling infrastructure is in short supply.

Virginia has obtained federal funding to add train tracks in and around Fredericksburg. But the state hopes to tackle additional projects to improve safety, reduce delays and provide more reliable trips between D.C. and Richmond — projects that would cost a combined $5 billion.

“We must have additional track capacity in the corridor to support passenger and commuter rail and also freight rail,” said Emily Stock, who is overseeing the DC2RVA project for the state, earlier this month as she unveiled recommendations for the project.

“Northern Virginia is the most congested area of the corridor both for roadway traffic and rail traffic,” Stock said.

Amtrak could see many other upgrades in coming decades, if the money and support is there for an ambitious slate of upgrades.

In Baltimore, a $4 billion replacement for the 141-year-old Baltimore and Potomac Tunnel just southwest of Penn Station could cut trip times by about two minutes each way and eliminate a choke point.

A $20 billion new tunnel leading into New York City would run next to the current, narrow two-track connection.

Such improvements could cut the fastest trips between D.C. and New York to just over 2 hours instead of the almost 3 hours the trip takes today.

Plans are in the works to help local commuters, too.

VRE has been studying whether to extend its Manassas Line to Gainesville, but a study found the cost of the extension might outweigh any benefits. A team working on the project recommended the commuter rail consider relocating and expanding an existing station, which could add another six trains daily.