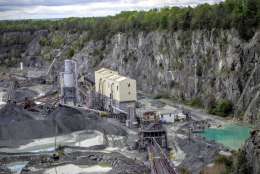 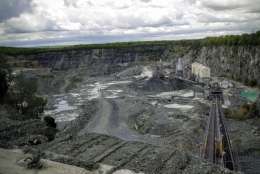 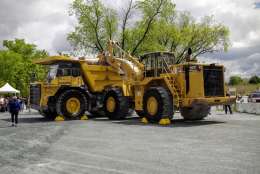 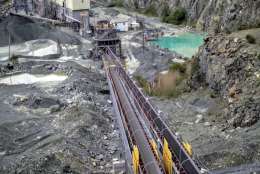 This is the fourth story in WTOP’s series, Crumbling Capital, scrutinizing the decaying infrastructure in the D.C. region and what’s being done to fix it.

WASHINGTON — A Montgomery County quarry that yielded crushed stone to build the Intercounty Connector and widen Interstate 270 could provide a solution to a century-old infrastructure shortcoming that threatens the drinking water of the nation’s capital.

WTOP has learned that local water officials are looking into the possibility of utilizing the Travilah Quarry, located on Piney Meetinghouse Road in Rockville, Maryland, to provide water storage for the local D.C., Maryland, and Virginia water utilities in the event that water from the Potomac River would become unavailable or undrinkable.

The Washington Aqueduct would only have a 24- to 48-hour water supply available if the Potomac were ever to suffer a major contamination event, according to general manager Tom Jacobus.

“It could happen very innocently, by accident, or worse, intentionally,” said Jacobus. “It could be very damaging to us for a period of time.”

The Washington Suburban Sanitary Commission, which serves most of Montgomery and Prince George’s counties, draws 30 percent of the water it sends to customers from the Patuxent River. Fairfax Water, which serves Fairfax and Prince William counties, gets a portion of its water from the Occoquan Reservoir.

Jacobus said local water officials have quietly been seeking an additional water source if water from the Potomac River can’t safely be used.

“The three utilities, and the Interstate Commission on the Potomac River Basin, along with the Metropolitan Washington Council of Governments have been working over the last several years to look at alternatives to get better interdependencies, to have more resilience in our system,” Jacobus said.

Jacobus said the Travilah Quarry may be “the hole in the ground,” he and other water executives have been seeking.

“If it were filled with water today, right now it would have about 8 billion gallons of water,” said Jacobus. “You could produce water for about 14 days, and we believe that’s a reasonable amount of time that whatever made the river unavailable to us could be cleaned up, and we could get back to the river.”

Extensive testing has been done to see whether the Travilah quarry could safely hold water.

“Scientists looked at the Travilah to see if there were minerals that would naturally be occurring that would make it unsuitable as a water storage reservoir,” said Jacobus. “The indications are there is nothing that would prevent us from using that.”

Although the size and structure of the Travilah Quarry seem desirable to local water officials, at least one sticking point exists — the quarry’s owners aren’t done with it.

“All quarries have a finite life span,” said Richard Freedman, director of land and environment for the Mid-Atlantic region for Aggregate Industries, the United Kingdom-based company that owns the property. “This quarry has about 60 years of life left.”

Jacobus and Freedman said it was premature to discuss how the water utilities might use or purchase the Travilah Quarry.

“It’s a long ways away, but we’re always interested in the conscientious repurposing of our property,” Freedman said. “I don’t know if it will end up being a reservoir, but that’s a possibility the company would explore and be receptive to.”

About the Travilah Quarry
Create your own infographics

In the meantime, the quarry continues to provide material for local construction projects. And the potential water storage capacity will only increase as the quarry grows deeper.

“In its deepest points, it’s about 450 feet deep now, but some is at ground level,” said Freedman of the quarry’s current dimensions.

Another advantage of the Travilah Quarry site is that it could feed all three utilities and crosslink the three water systems, providing a level of redundancy and protection missing today.

In the post-Sept. 11 era, the urgency to identify and secure an additional water source is heightened in the national capital region, which security experts have long considered a prime target for terrorism.

“Having interconnections among the water utilities, so one could pick up the slack that the other can’t meet, and having water stored off the Potomac would be an extraordinarily valuable asset,” said Jacobus. “It would contribute measurably to the security of the region, and all the activities that occur in the region, which are vital to the nation’s well-being.”

But other risks pose threats to the area’s water supply.

“A water shortage in this region, whether it be drought or some other interruption to service, has massive implications,” said WSSC’s Chief of Plant Operations J.C. Langley. “It would require a huge response at all levels of government.”

Tunnels would need to be built to connect the quarry to the Washington Aqueduct, WSSC and Fairfax Water processing plants, including tunnels underneath the Potomac River.

“Who is going to pay for that? Infrastructure funding in this country, for water or land, is a major issue,” he said.

While acknowledging the benefits of off-river storage, Fairfax Water declined to address specifics of how the Travilah alternative could impact the region.  The utility recently signed a long-term agreement to turn a portion of a quarry owned by Vulcan Materials into a reservoir by 2035.

Jacobus acknowledged the project would be a massive undertaking, but he remains committed to the project’s purpose and scope.

“It is an opportunity to serve the region and give it a degree of independence and resilience that we currently don’t have,” said Jacobus.