The workers are real people with real families, so be extra cautious when driving past the zones.
Listen now to WTOP News WTOP.com | Alexa | Google Home | WTOP App | 103.5 FM
(1/5) 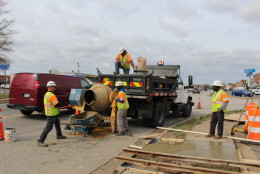 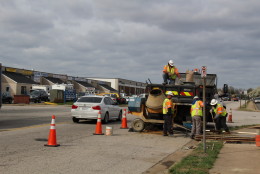 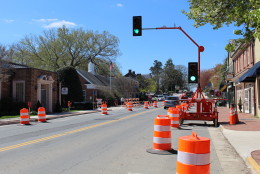 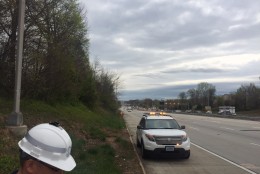 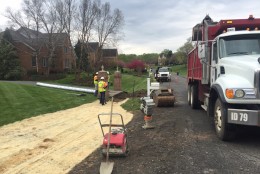 CHANTILLY, Va. — If you don’t think road crew workers are at risk, stand with them on Interstate 66 as motorists zip by at 65 mph.

There are real people with real families behind those orange cones, so it’s even more important to focus on the road in work zone areas.

“Just imagine if you’re doing something, and your back [is to traffic],” said Paul Matticks, the Virginia Department of Transportation’s statewide safety compliance manager. “You don’t even know what’s happening, you hear the noise, but you’re so focused on what you’re doing to fix the road … that you hope what’s set up is good and that everybody’s paying attention.”

The noise is a symphony of sorts, Matticks said. That’s why workers mostly communicate through eye contact and hand signals.

Work zones aren’t restricted to highways, though. On Tuesday morning, a crew worked to repair a culvert on a small street just off Hunter Mill Road.

This time the symphony was different; there were beeping trucks and loud engines as a handful of cars squeeze by.

Last year, according to VDOT statistics, seven people were killed across the state in work zone crashes.

In northern Virginia, there were 994 crashes in 2015, 38 percent of the statewide total. Some 504 people were hurt in the crashes; one person was killed.

A total of 466 crashes involved three or more vehicles, and two crashes in northern Virginia involved seven vehicles each.