The COVID-19 numbers you should be most encouraged about

There's good news on the coronavirus front: the numbers are better than you might think and certainly more encouraging than they were last fall.
Listen now to WTOP News WTOP.com | Alexa | Google Home | WTOP App | 103.5 FM

There’s good news on the coronavirus front: the numbers are better than you might think and certainly more encouraging than they were last fall even when positivity rates and other metrics were lower than they are today.

And it’s all because of multiple vaccines that are weakening the virus’ ability to cause the sort of damage it did to people even back in the fall and winter.

“Any vaccine goes into someone’s arm, we’re in a better spot,” said Dr. Amesh Adalja, a senior scholar at John Hopkins Center for Health Security and an infectious disease physician. He said Israel saw major declines in cases once about 40% of the population there was vaccinated.

“Increasingly we’re getting to that point, so we will probably see the light at the end of the tunnel soon,” said Adalja.

Right now in Maryland and Virginia, about 25% of the population is fully vaccinated. In D.C. the number is closer to 15%.

However the daily positivity rates are also on the decline, as are deaths and hospitalizations.

“You have to remember even when cases go up, even when hospitalizations tick up, they’re sort of, of a different flavor,” now that the highest risk parts of the population are vaccinated, he said. “Our vaccine prioritization scheme was meant to do one thing: to remove the threat that this virus posed to hospitals.”

He added, “The goal of the vaccine was to decouple cases from serious disease, hospitalization, and death. The vaccine is doing an excellent job already at that.”

Some have pointed out that the metrics we’ve been using in all of this are still all generally higher than they were in months like August, September, and October. But Adalja is not one of them.

“I don’t think you can make a fair comparison between August and September,” said Dr. Adalja, who cited the vaccine as the reason why.

“The virus is becoming tamer,” he said. “It’s unable to do what it could do just back in December and January because so many people have been vaccinated.”

So even if cases go up, “what I think is more important is looking at the ability of this virus to cause serious disease, hospitalization and death and that’s increasingly being taken away from it.”

He said we might not be able to eliminate the virus, but that’s not the goal of the vaccine.

Now that younger, more risk-tolerant people are also able to get vaccinated, he’s optimistic that you’ll start to see further declines in cases in the weeks ahead. 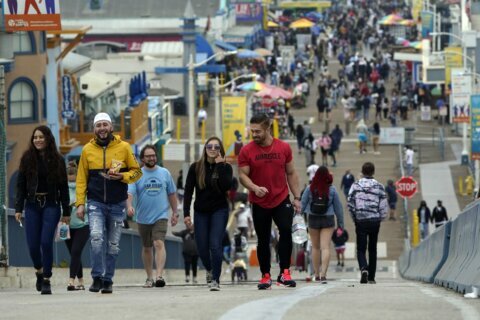