Fauci says Trump should urge Republicans to get vaccinated

Dr. Anthony Fauci said Sunday that he hopes former President Donald Trump will urge his followers to get the COVID-19 vaccine.

“Fox News Sunday” host Chris Wallace pointed out that according to a recent NPR/PBS News Hour/Marist poll, 49% of Republican men said they don’t intend to get the vaccine.

Wallace asked Fauci, the nation’s top infectious disease expert, how much of a difference it would make if Mr. Trump led a campaign to urge Republicans to get vaccinated. Fauci replied: “It would make all the difference in the world.”

“He’s a very widely popular person among Republicans,” Fauci continued. “If he came out and said, ‘Go and get vaccinated. It’s really important for your health, the health of your family and the health of the country,’ it seems absolutely inevitable that the vast majority of people who are his close followers would listen to him.”

A recent CBS News poll found 34% of Republicans say they don’t plan to get the vaccine, while only 10% of Democrats say they’ll abstain. Fauci added that he is very surprised that a high percentage of Republicans are avoiding the vaccine, saying doesn’t understand why.

“This isn’t a political issue, this is a public health issue,” he said.

Mr. Trump and former first lady Melania Trump got vaccinated pirvately at the White House in January, while other top GOP officials, including Vice President Mike Pence, got the shot on television in a public show of support. Mr. Trump has not publicly mentioned that he was inoculated, though he did encourage others to take the vaccine when he spoke at the Conservative Political Action Conference in Florida.

Fauci, who served on the White House coronavirus task force for both Mr. Trump and President Biden, noted that it was the Trump’s administration’s “Operation Warp Speed” that helped enable the quick approval and production of vaccines. He said it is a contradiction that Mr. Trump isn’t now urging the public to get vaccinated.

“I wish he would. He has such an influence over people in the Republican Party. It would really be a game changer if he did,” Fauci said. 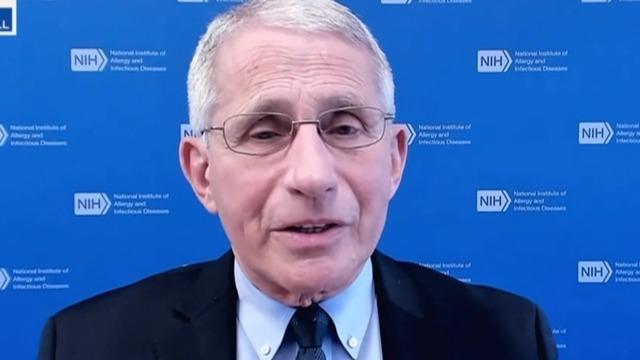 Fauci on combating COVID one year into pandem…

Fauci also said he is confident about meeting President Biden’s goal of every American over 18 being eligible for a vaccine by May 1, and he agreed with Mr. Biden’s prediction that if people keep observing social distancing and wearing masks, it should be safe to hold small gatherings for the Fourth of July.

On Friday, the U.S. shot past the milestone of administering 100 million doses of COVID-19 vaccine. According to figures posted by the Centers for Disease Control and Prevention, more than 11% of the total U.S. population is now fully vaccinated, and 21% of Americans have received at least one dose.