What DC can learn from the 1918 flu epidemic

D.C. was hit hard by the 1918 influenza epidemic. A local historian explains the District was a very different place more than a century ago, but a public health historian told WTOP there are still similarities that can teach a lot about COVID-19 response.
Listen now to WTOP News WTOP.com | Alexa | Google Home | WTOP App | 103.5 FM

Ever since the novel coronavirus began infecting millions globally and having an unavoidable impact on American life, a lot of people have been reminded about a public health crisis from more than a century ago.

In 1918, World War I was coming to an end at an estimated cost of 15 million to 19 million lives. It seemed like an unfathomable number, but an even larger death toll was in store: An influenza epidemic that ended up killing about 50 million people worldwide, including about 675,000 Americans, according to the Centers for Disease Control and Prevention.

That included nearly 3,000 people in Washington, D.C., between October 1918 and February 1919. Given the District’s population at the time, that worked out to an excess death rate of 608 people per 100,000, one of the highest in the country.

Looking over the history of the earlier pandemic, it’s hard to escape the conclusion that while a lot of things have changed since then, a lot of the factors at work more than a century ago — mixed acceptance of social distancing, a varied approach to shutdowns — are affecting decisions being made now.

This report relies on the Influenza Encyclopedia, compiled by University of Michigan professor Howard Markel, and reports from The Washington Evening Star as the epidemic was happening.

‘There should be no public alarm’

On Sept. 21, 1918, The Washington Evening Star reported the District’s first case of, and first death from, what it that day called “the Spanish influenza” — named for the disease’s then-suspected origins, though the latest thinking is the pathogen started among U.S. soldiers in Kansas who then deployed abroad.

John W. Clore, of Florida Avenue, was 30 years old. While the influenza, like COVID-19, mostly killed older people, a surprising number of those who lost their lives in the 1918 epidemic were relatively young.

The newspaper repeated “the presumption of the health department” that Clore had gotten sick in New York, and that he had been stricken and diagnosed and had died in the course of a few hours. Health Officer Dr. William C. Fowler told the Evening Star, “If there are any other cases, they have not been reported to my office.”

That didn’t last long. The newspaper also listed on the next page the number of American soldiers and Marines killed in the war, which passed 35,000. Soon, the relative death tolls would change places.

The next day in the Star, Surgeon General of the Army, William C. Gorgas, published 12 rules for staying safe from influenza. Some of them remain solid advice today, such as avoiding crowds, washing your hands regularly and covering your coughs and sneezes.

Others — chewing your food well, drinking a glass of water when you wake up, breathing deeply, avoiding tight clothes and keeping the windows open — not so much.

The editorial board said, “There should be no public alarm over the situation. … Agitation invites it. Fresh air fights it. Common sense will aid in its defeat.” Fowler later that month said, “There is little danger that Washington, with its high degree of wholesomeness, will be the scene of serious outbreak of the disease.”

Wholesomeness wasn’t enough. It didn’t take long before D.C. instituted the kind of social distancing guidelines that the city lives under today. While Fowler and other officials resisted the idea for a few days, instead advising people to stay off streetcars and away from each other as best they could, by the time the month was over nine days later, 37 people in the District had died of the virus.

On Oct. 2, D.C.’s schools were closed. The next day, Louis Brownlow, one of the three federally-appointed commissioners of D.C., canceled all public gatherings, closing churches, movie houses and theaters.

Businesses remained open, but hours were staggered so as not to overload the public spaces or public transportation.

By then, however, the “influenza,” as it was commonly called, was on the loose.

Marian Moser Jones, a public health historian and a professor at the University of Maryland School of Public Health, told WTOP, “They waited until it was almost at its peak mortality … and there was a terrible outbreak in Washington, D.C.”

By the time October 1918 was over, 1,471 people in D.C. had died of the influenza, according to Fowler’s year-end report to the commissioners.

Segregation was a hallmark of the District at the time — on Oct. 21, the Evening Star reported that “A new relief station for colored people, separate from the whites, has been organized” at the Armstrong Manual Training School, on P Street NW between 2nd and 3rd streets.

It is not explicitly said that previous hospitals were white-only, but virtually every other segment of D.C. life was segregated at the time.

The health disparities D.C. Mayor Muriel Bowser talks about today were in evidence then, too — by the time the year was out, the death rate from the influenza was 9.2% for “colored” people (the terminology used in Fowler’s report), 6.1% for white people.

Even as the deaths were rising, people were unhappy about the restrictions. Moser said, “There was public pressure to reopen public institutions … and they gave in.”

In October, a pastor unhappy about the closure of churches wrote to the Evening Star saying that panic, “the most powerful ally of the disease,” was being aided by “the fact that the normal religious life of our city has been disorganized.”

Moser said the current situation gives her a new perspective on the complaints of the past.

“When I read about this, I see how much pressure the public officials must have been under … just to allow life to resume as normal,” she said.

“Now that we’re in the middle of this, I can understand why they were under such pressure,” she added. “Whereas before, when I was reading about this, I thought ‘They were crazy! There was a flu pandemic!’ … And now we can understand, because we’re weary of all of these restrictions on our life, and we want things to back to the way they were.”

Historian Matthew Gilmore, who writes a blog and has written three books on D.C. history, said the resistance to social distancing measures wasn’t rooted in lack of knowledge or selfishness.

For one thing, it was the nation’s capital and there was a war on. For another, this was a very different city, in a time before working from home and grocery delivery existed.

You really didn’t have a lot of isolation at that point.

“The population was much more crowded together,” he said. “You didn’t have a lot of Northwest Washington developed, where you now see lots of single-family homes and even the large apartment buildings — those did not exist at the time. The close-in, downtown Washington was heavily populated.”

“So the restriction on going to the theater and going to church — is that going to have much of a social distancing effect when people are living in close proximity? You really didn’t have a lot of isolation at that point.”

As we know now from COVID-19, cases, hospitalizations and deaths lag behind the public-health measures that officials take.

On Oct. 21, the Evening Star reported that 61 D.C. residents had died in the preceding 24 hours, down five from the previous day and a total “falling off” of 48 deaths in the previous 72 hours and of 692 cases over the previous 48 hours. Health authorities had “buoyant hopes that the worst is over.”

By Dec. 2, D.C. had gone four days without an influenza death. Health officials said the flu would continue in some form throughout the winter, but that the worst had passed. Fowler said that he expected an uptick in cases during cold, rainy weather, while many doctors thought rain washed the virus away.

It did, but in the wake of the relaxing of closures and other public health restrictions, influenza deaths jumped from 131 in November to 327 in December, Fowler’s report found.

Still, it wasn’t considered serious enough to reclose schools, churches and the like. In mid-December, Commissioner William Gwynn Gardiner said that deaths from all causes in D.C. totaled 260 between Dec. 1 and 12, compared with 229 for the same period a year before. Another 263 people died in the District of influenza in the first half of 1919.

Somehow, as 1918 turned to 1919, not only the influenza but the memory of the epidemic was fading.

By Jan. 1, the influenza epidemic occupied the 16th subsection of the Star’s story of 1918 in review — perhaps understandably rather lower than the end of the war, but only one item above the appointment of the District’s “first woman traffic policeman.” It was still on people’s minds somewhat, but most of the mentions of influenza in the Evening Star were in advertisements for supposed cures such as — um, laxatives.

Brownlow gave his impression of the influenza outbreak in his autobiography, Gilmore said, but “It doesn’t even have its own separate chapter” in the two-volume work.

People 100 years ago weren’t too different than people now.

Gilmore said there were several reasons for the passing of the epidemic from people’s memories, one of which was a common feature in the District.

“A lot of these people came from elsewhere,” he said. “So if your sister moved to Washington as a war worker, and then either suffered influenza or died from it, how much of a Washington, D.C., story is it? How much is it a story which belongs to the family?”

He also said, simply, “It was also probably something that people didn’t want to remember.”

Moser said it’s important to remember the influenza epidemic as the District and the D.C. area tackle COVID-19 — especially the effects of the regulations.

“People 100 years ago weren’t too different than people now,” Moser said. “They were highly social; it was modern American cities with public transport and people going shopping and going to weddings and political rallies — it was an election year — people wanted to get back to life as usual.”

“The pressures are similar, and the reaction in terms of viral transmission is probably going to be similar,” she added. “And I think that’s something we can really learn from this [earlier] pandemic, and hopefully mount a sustained response.” 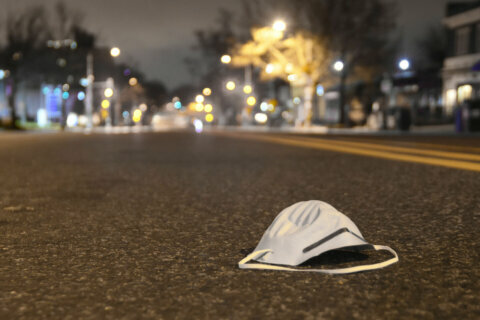 Experts: DC region ‘not out of the woods yet’ on coronavirus