"We'd started writing our protocols in February when we knew about the coronavirus and that it was starting to move around the world," said a zoo official.
Listen now to WTOP News WTOP.com | Alexa | Google Home | WTOP App | 103.5 FM

Things are far from normal at the Smithsonian’s National Zoo in D.C. as zookeepers there can’t practice social distancing while doing their jobs. So far, no employees or animals are sick, and no animals have been tested for coronavirus, but the zoo is ready.

“So we’ve been preparing for this since February. We’d started writing our protocols in February when we knew about the coronavirus and that it was starting to move around the world,” said Brandie Smith, deputy director of the zoo.

Initially, that protocol meant wearing masks and protective gear when interacting with primates or their enclosures, since they’re so similar to humans and likely to be able to contract the virus.

The zoo’s preparedness plan also includes restricting behind-the-scenes access in all animal areas, cross-training animal care staff on essential functions, and establishing protocols for use of personal protective equipment, hygiene and cleaning, and employee self-screening, the zoo said in a statement.

“We’ve been watching the news, and watching the science to see what other species could be susceptible, so when the tiger from the Bronx Zoo tested positive, we immediately implemented protocols for felids — so for the lions, tigers, clouded leopards and bobcats,” she said.

From their knowledge of other coronaviruses, Smith said, some species can be susceptible, such as mustelids, which include skunks, mongoose and weasels.

The National Zoo is one of only a handful of zoological institutions in the country with full-time, public health-trained veterinary epidemiologists working with animals.

Smith said nearly every zookeeper is working on-site, but she said they are focusing on taking care of each other, too.

“Zookeepers can’t socially distance. They have to work closely; that’s what’s required of their job when it comes to caring for the animals. It might be shifting them, training them. We are close to one another — we have to be to get our work done,” she said of focusing on healthy protocols.

No animals in the zoo have shown symptoms of the new coronavirus, which Smith said, in a tiger, for example, would present as wheezing, coughing, nasal discharge and other respiratory symptoms.

Meanwhile, there are some species who clearly miss their visitors, such as the giant apes.

“We actually have people working on-site, and they’ll walk through the Great Ape House just to give them something to look at,” she said.

The zoo is sharing daily videos of its animals on social media and has a few live web cameras for visitors to enjoy while it is closed. 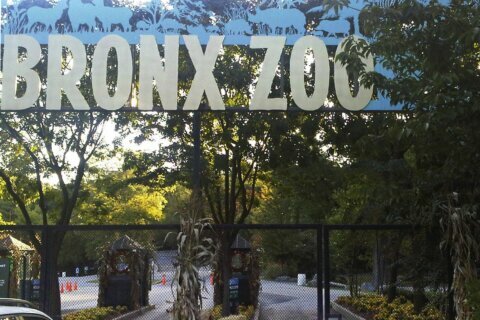