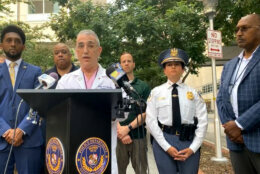 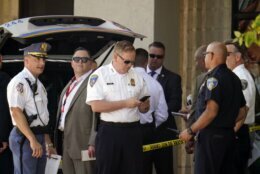 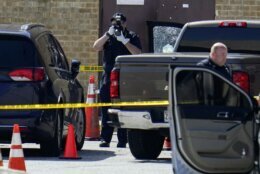 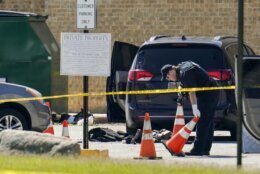 Members of the warrant apprehension task force were looking for a vehicle and suspect wanted in a June 19 homicide in Baltimore and spotted them in the parking lot of Security Square Mall in suburban Woodlawn, Baltimore Police Commissioner Michael Harrison said at a news conference.

When officers tried to approach the vehicle, the suspect got out and fired multiple rounds, striking two detectives, he said. Officers returned fire, striking the suspect, a 32-year-old man they had been pursuing, Harrison said. The man, identified as Justin Powell of Baltimore, was taken to a hospital, where he died. Harrison said Powell was wanted on a homicide and handgun warrant.

The wounded detectives were taken to the University of Maryland Medical Center’s shock trauma unit, where the physician-in-chief, Thomas Scalea, said “both were seriously ill when they arrived.”

“We were able to get them stabilized,” he said. “Both will require some therapy. … We expect both of them to survive.”

Mayor Brandon Scott said he’s thankful the officers were “alert and upbeat” and wished them a speedy recovery. Building a safer city requires holding violent offenders accountable and that’s what the officers were doing Tuesday, he said.

“The WATF will continue to aggressively track down those who commit violence on our streets and they will continue to send a clear message as they do each and every day, that we will not allow folks to think they’re going to get away with harming people on the streets of Baltimore,” Scott said.

It was not immediately clear if the detectives wore body cameras at the time of the shooting.

The wounded officers are city detectives who are deputized U.S. marshals, part of Baltimore’s Warrant Apprehension Task Force, which handles high-risk warrants. Members of the task force can make arrests outside their police agency’s immediate jurisdiction, allowing them to track fugitives in the region.

Tracking homicide suspects and serving arrest warrants is one of the most dangerous things law enforcement officers can do, Harrison said.

“What we saw today was exactly what officers go through; these are the most dangerous situations imaginable, but they did their jobs with bravery, with courage and with professionalism,” Harrison added.

A section of the Baltimore County mall parking lot was cordoned off with crime tape as officers collected evidence surrounding a pickup truck, which had bullet holes in the driver’s side window and windshield. Some two dozen police officers, paramedics and other officials gathered at an entrance to the mall complex, and a police helicopter hovered above the area.

One police official could be seen carrying pieces of cardboard and other items and storing them in a police vehicle. Numerous homicide detectives gathered outside of a mall entrance.

The rest of the sprawling shopping mall complex was largely open to the public late Tuesday morning. Students at a trade school at the rear of the mall complex were working with their instructors, paying scant attention to the large police presence on the other side of the plaza.

In Baltimore, Harrison said the criminal investigation is being handled by police in Baltimore County, a collection of suburban communities that ring the mid-Atlantic city and where Tuesday’s shooting took place. The city’s special investigations response team will also probe the shooting, he said.

An official who monitors Baltimore’s court-enforceable agreement to reform its police department stood alongside Harrison and the mayor at Tuesday’s news conference. The monitor will report details of the shooting to a U.S. judge who oversees Baltimore’s federal consent decree, which began in January 2017 after the U.S. Justice Department discovered longstanding patterns of excessive force, unlawful arrests and discriminatory police practices.

In February, a deputy U.S. Marshal was shot and wounded, and a suspect was killed, during a shootout as law enforcement officials tried to arrest the man, wanted for attempted murder and robbery, in Baltimore.