Police in Arlington County, Virginia, said Thursday they are carrying out a criminal investigation after a woman reported she was sliced by razor blades taped to a political sign.
Listen now to WTOP News WTOP.com | Alexa | Google Home | WTOP App | 103.5 FM
(1/2) 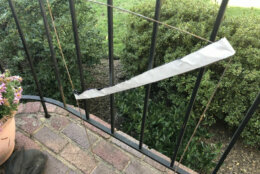 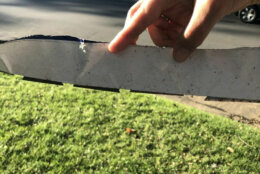 Police in Arlington County, Virginia, said Thursday they are carrying out a criminal investigation after a woman reported she was sliced by razor blades taped to a political sign.

Police said the woman had removed political signs from the median of George Mason Drive between Yorktown Boulevard and Four Mile Run Drive on Wednesday and was separating the signs from their metal bases when she was cut by the razor blades, which had been taped to the bottom of the sign.

The woman had minor injuries, which did not require medical attention, police said. No other similar incidents have been reported, but police said they are continuing to investigate.

Police released photos of the sign, which showed at least four razor blades taped to the bottom strip of a sign.

Police did not say what cause or candidate the political sign referenced.

They urged people to be cautious when removing political signs.

Campaign signs have to be removed within five days after the election.