A Centreville man shot by police during a traffic stop in Arlington County died from his injuries, and an officer who was pinned between two vehicles has been released from the hospital.
Listen now to WTOP News WTOP.com | Alexa | Google Home | WTOP App | 103.5 FM

WASHINGTON — A Centreville man shot by police during a traffic stop in Arlington County died from his injuries, and an officer who was pinned between two vehicles has been released from the hospital, police said Thursday.

Baok had an outstanding arrest warrant for violating probation – a misdemeanor charge. The warrant was issued earlier this month in Fairfax City General District Court, according to Virginia State Police.

Police tried to stop Boak on Interstate  395 based on a hit from a license plate reader that said the owner of the truck Boak was driving had an outstanding warrant. Boak wouldn’t stop and he maneuvered around officers to continue south on the highway, Savage said.

Officers caught up with Boak on an offramp to Glebe Road. As officers approached the truck on foot, Boak hit one officer, pinning the officer against another vehicle, she said.

That’s when officers fired at the truck, striking Boak. Officers were then able to free the pinned officer after moving the truck, she said.

The pinned officer suffered serious injuries but was released from the hospital and is now recovering at home, Savage said.

Police have not said how many officers shot at the truck or how many shots were fired. Savage said the investigation is ongoing.

The names of the injured officer and the other officers involved have not been released. 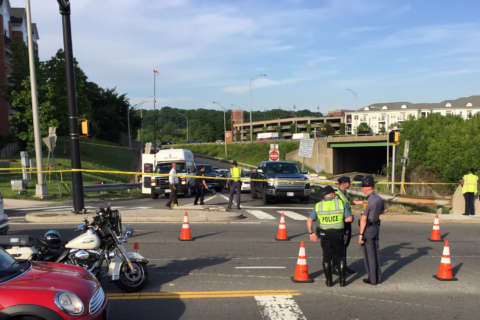