WASHINGTON — Arlington County police shot a driver who they said struck an officer with his pickup during a traffic stop on an Interstate 395 offramp Wednesday afternoon.

The officers stopped the black truck on the ramp to Glebe Road about 4:30 p.m. because the truck was associated with someone who was wanted by police. However, it was not clear whether the driver was the same person sought by police, nor was it clear what he was wanted for, said Ashley Savage, spokeswoman for Arlington County police.

As the officers approached on foot, the driver struck one of the officers with his car. Officers then fired at the truck, hitting the driver, Savage said.

The shooting investigation closed the ramp from the southbound lanes of I-395 and contributed to outbound delays. It reopened just before midnight, according to WTOP Traffic.

The closure was one of several major road incidents in the region Wednesday afternoon. A fatal crash in Anne Arundel County closed a stretch of U.S. Route 50, and a water main that ruptured in the District’s Palisades neighborhood closed portions of MacArthur Boulevard and Canal Road.

WTOP’s Kristi King contributed to this report from Arlington.

Woman drives into oncoming traffic in fatal US 50 crash 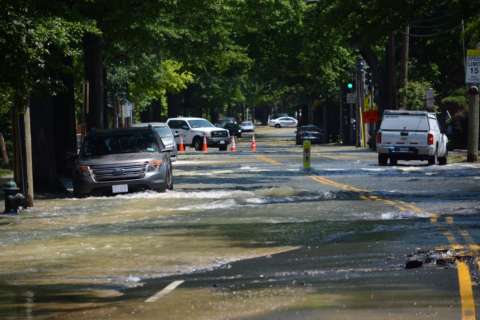