On a camping trip as a child, Melanie Kay-Wyatt came across another camper who needed assistance in play areas.

She stopped and worked to help the girl, and was struck when the girl’s parents approached her, thanking Kay-Wyatt for engaging with and including their daughter. The response she received that day in part motivated her to pursue a job in special education, spearheading a 26-year career that most recently gave her the opportunity to become the interim superintendent of Alexandria City Public Schools in Virginia.

The school board appointed Kay-Wyatt as interim superintendent last week. She will take over for Gregory Hutchings, who announced his resignation in June, on Sept. 1. Kay-Wyatt has served as an elementary, middle and high school special education teacher and most recently worked as the school system’s chief of human resources.

“As a 26-year veteran of education, when you go to the grocery store or when you’re just walking down the street and you run into a former student who provides an update on something that they’re doing, or they’re sharing a family memory or a memory that they have with you when you were their administrator, in their class, that is what keeps the passion going,” Kay-Wyatt said.

Entering the new school year, Kay-Wyatt said, the city is focusing on offering 30 minutes of social-emotional learning lessons daily. She said the lessons will look different across grade levels and for each student. Things like community circles will be used to reinforce positive behavior interventions and supports, according to a letter sent to the school community.

“It’s really important to first meet the socio-emotional needs of our students, because without making sure they’re supported in that manner, it’s going to be very hard for them to access the academic learning,” Kay-Wyatt said.

With regard to the coronavirus pandemic, Kay-Wyatt said city staff has a COVID-19 vaccine requirement that includes a medical or religious exemption. There’s no student requirement, but Kay-Wyatt said the city encourages “those students and families also to consider becoming vaccinated at this time as we open schools.”

School officials will work with health partners, she said, to make data-based decisions about mitigation measures. However, she said, “As a community, we really just want to open healthy schools.”

The school system of about 15,000 students also detailed new security enhancements in place for the upcoming school year earlier this week. Middle and high schoolers will be required to carry student IDs, and school resource officers will be present at Alexandria City High School, the Minnie Howard Campus of ACHS, Frances C. Hammond Middle School and George Washington Middle School.

Parents pressured to bring the resource officer program back to the city. The school system has had problems with dozens of fights and weapons, on and off campus, including the stabbing death of a student at the Bradlee Shopping Center during a brawl in May.

A working group has been established to form a recommendation about the future of police in city schools.

“Our senior leadership team has been planning all year,” Kay-Wyatt said. “It wasn’t a summer effort, it’s been ongoing and will continue to be an ongoing effort to make sure that we’re doing everything we can to support and protect our schools.”

As of this week, Kay-Wyatt said, the city has about 50 full-time teaching vacancies, but has made offers to some candidates too. She said it’s hard to compare the data to last year, the first completely in-person school year since the pandemic started.

The school system also has a new website and a new program called ParentSquare, a mass communication system that sends out information in several languages.

The first day of school in Alexandria is Aug. 22.

Kay-Wyatt is one of several first-year superintendents in the D.C. region. Michelle Reid in Fairfax County and Cheryl Dyson in Frederick County, Maryland, are also entering their first years.

WTOP’s Colleen Kelleher and Nick Iannelli contributed to this report. 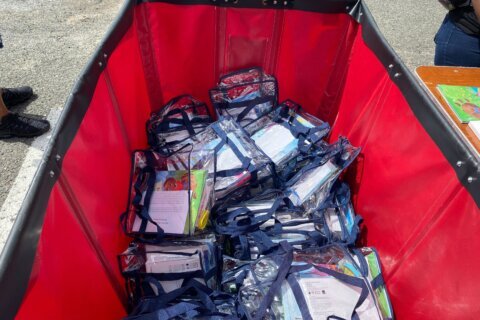