Three people, including two firefighters, had to be taken to the hospital after a fire at a high-rise apartment building in Alexandria. None of the injuries are considered to be life threatening.
Listen now to WTOP News WTOP.com | Alexa | Google Home | WTOP App | 103.5 FM
(1/4) 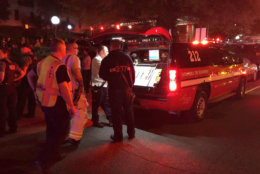 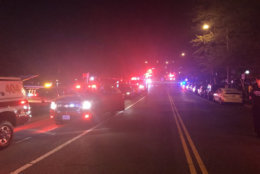 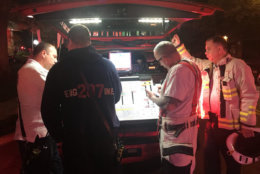 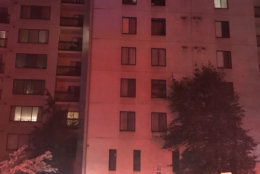 WASHINGTON — Three people including two firefighters were taken the hospital after fire broke out at high-rise apartment in Alexandria, Virginia.

The fire involved three floors at the Sentinel of Landmark on Stevenson Avenue and the building had to be evacuated.

One civilian and two firefighters were taken to the hospital, but their injuries were not life threatening.

“Just after 2 o’clock, the 911 center began to receive multiple calls from various sources reporting a fire on the ninth floor that had already extended to the 10th.”

Debris from the blaze started another fire on the balcony of a first-floor apartment.

Firefighters from Fairfax and Arlington counties also responded to help put out the blaze.

“I can’t speak enough about our firefighters from all of the jurisdictions who really made that hump up there with about 100 pounds of extra weight each and were quickly able to bring this under control before something bad happened,” Schultz told NBC Washington.

Firefighters are still trying to determine how the fire started.

Alexandria Fire said three people were displaced by the fire, two of whom relocated on their own.

The fire department activity blocked all lanes on Stevenson Avenue at Yoakum Parkway, but the area has since reopened.