With his visit to a state he won by fewer than 12,000 votes, Biden set out to build public support for his plan and try to persuade resistant Republicans that his massive proposal is an investment that the country can’t afford to pass up.

“We need to invest in things our families care about and need the most,” Biden told hundreds of supporters who showed up for a socially distanced car rally in the Atlanta suburb of Duluth.

The Georgia trip is part of an effort to gain momentum for the massive — and expensive — agenda Biden articulated during his first address to a joint session of Congress one night earlier. It’s a dramatic shift from nearly four decades of politics in which leaders from both parties have spoken of a need to contain government.

There’s special significance in Biden’s decision to make Georgia his first stop after the address. He was the first Democratic presidential contender to carry the state since Bill Clinton in 1992.

The state, long a Republican stronghold, is now a political battleground that will feature closely watched races for Senate and governor next year. It will almost certainly be one of the most competitive states during the 2024 presidential campaign.

Before the evening car rally in Duluth, Biden and his wife, Jill Biden, first visited former President Jimmy Carter and his wife, Rosalynn Carter, at their home in Plains, Georgia.

Carter’s defeat to Republican Ronald Reagan in 1980 ushered in an era in which calls for smaller government and lower taxes for big business and the wealthy were embraced as a tonic for economic growth.

Biden, who established himself as moderate during his decades in elected office but has moved to a more progressive approach to governing in the early days of his presidency, offered a rebuttal Wednesday that Reagan’s “trickle-down economics has never worked.”

He renewed his call for the wealthiest Americans to pay more in taxes to help pay for a wide array of proposals, including universal pre-kindergarten, tuition-free community college, expanded childcare benefits and more. Biden says his proposal for about $1.5 trillion in tax hikes will only target households making $400,000 or more.

“It’s about time the very wealthy and corporations start paying their fair share,” Biden said. “It’s as simple as that.”

For their part, Republicans are resisting Biden’s calls for more spending but are still fine-tuning their argument and steering clear of attacking him personally.

“I think the president is hard to vilify. I think he’s well intentioned. I think he was warmly received in a personal way,” said Sen. Roy Blunt, a member of the Republican leadership. “But the proposals he made are overwhelming in terms of a new footprint for the government, and a new level of government spending.”

It’s no accident Biden chose Gwinnett County to serve as the backdrop to begin making his case for his spending plan. A fast-growing suburban Atlanta county northeast of downtown, Gwinnett has become a source of Democratic support in the state.

Gwinnett stands out for its racial and ethnic diversity, with fast-growing Asian American and Hispanic populations and a thriving business community of immigrants and first-generation citizens. The county anchors Georgia’s 7th Congressional District, which freshman Rep. Carolyn Bourdeaux flipped in 2020 to give Democrats control of both suburban House districts along metro Atlanta’s northern ring.

During Thursday’s visit, Biden met with a group of “Dreamers” — young immigrants who were brought to the U.S. illegally by their parents — to discuss reforms to the immigration system.

Biden is also scheduled to travel to Pennsylvania and Virginia in the days ahead to promote his spending plan.

The push for $4 trillion in federal spending is a considerable gamble. Biden is governing with the most slender of majorities in Congress, and even some in his own party have blanched at the price tag of his proposals.

Biden has repeatedly pressed his contention that his plans would put Americans back to work, restoring the millions of jobs lost to the virus. In his speech to Congress, he laid out an extensive proposal for universal preschool, two years of free community college, $225 billion for child care and monthly payments of at least $250 to parents. His ideas target frailties that were uncovered by the pandemic, and he argues that economic growth will best come from taxing the rich to help the middle class and the poor.

In his first three months in office, Biden has signed a $1.9 trillion COVID-19 relief bill — passed without a single GOP vote — and has shepherded direct payments of $1,400 per person to more than 160 million households. Hundreds of billions of dollars in aid will soon arrive for state and local governments, enough money that overall U.S. growth this year could eclipse 6% — a level not seen since 1984.

A significant amount proposed just Wednesday would ensure that eligible families receive at least $250 monthly per child through 2025, extending the enhanced tax credit that was part of Biden’s COVID-19 aid. There would be more than $400 billion for subsidized child care and free preschool for all 3- and 4-year-olds.

An additional combined $425 billion would go to permanently reduce health insurance premiums for people who receive coverage through the Affordable Care Act, as well as a national paid family and medical leave program. Further spending would be directed toward Pell Grants, historically Black and tribal institutions and to allow people to attend community college tuition-free for two years. 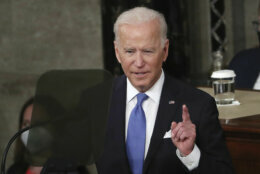 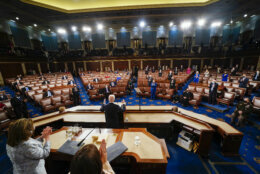 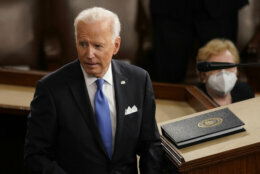 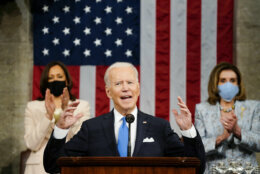 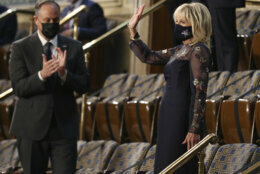 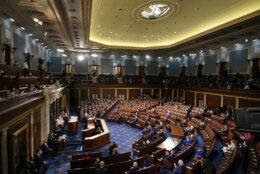 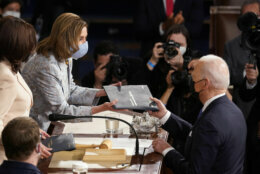 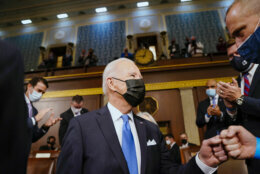 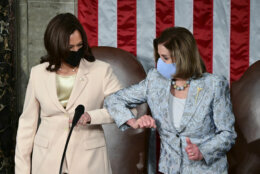 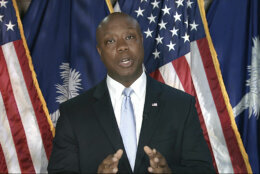