‘Congress should act,’ Biden tells lawmakers near and far

One of the most striking parts of President Biden’s address to Congress was his nod to the very House and Senate lawmakers who, even in their absence, will make or break the new administration’s ambitious agenda to rebuild America.
Listen now to WTOP News WTOP.com | Alexa | Google Home | WTOP App | 103.5 FM

WASHINGTON (AP) — The roar of applause that typically greets a new president entering the House chamber softened Wednesday to just a few hundred hands clapping as Joe Biden arrived to deliver his first joint address to Congress under strict coronavirus restrictions and tight security at the Capitol.

Usually an electrifying evening, this initial address from Biden was a more subdued affair, reflecting a country, and a Congress, only starting to emerge from the challenges of a lifetime.

Members of Congress took their seats, name cards spacing them out just a few to each row, some filling the visitor galleries because no guests were invited.

There was no crush of center-aisle lawmakers crowding to shake Biden’s hand, though he did fist-bump Chief Justice John Roberts and accept a hug from former rival Bernie Sanders, the Vermont senator.

No coordinated splashy fashion statements as even members of Congress are partly working from home. Masks were required, along with a negative COVID-19 test or proof of vaccination. Democrats outnumbered Republicans, who largely skipped the event.

Yet even with the diminished mood, one of the most striking parts of Biden’s address to Congress was his nod to the very House and Senate lawmakers who, even in their absence, will make or break the new administration’s ambitious agenda to rebuild America.

“Congress should act,” Biden told them over and over again.

As House Speaker Nancy Pelosi announced Biden’s arrival, standing with Vice President Kamala Harris behind the president in a portrait of two women in power the country had never seen, it was a reminder that Congress will determine whether his sweeping $4 trillion proposals to invest in America and revive the role of government will come to pass.

Unlike his recent predecessors, Biden is a veteran of the legislative process and appears eager to reengage Congress as a co-equal branch in governing.

When President Donald Trump addressed Congress, he largely relied on the sheer force of his personality to muscle his ideas into law, with mixed success. With soaring speeches, President Barack Obama ultimately worked around a resistant Congress using his “pen and phone” to push a second-term agenda through executive actions.

Biden is personally courting lawmakers with gusto, inviting them to meetings at the White House and sending his advisers to Capitol Hill, as he tries to nudge the narrowly split Congress to join his massive effort to reinvest in America.

Biden said he welcomes Republican ideas, but “doing nothing is not an option.”

“The president, he can put together whatever laundry list he would like to see Congress act on,” said Frances Lee, a professor of politics and public affairs at Princeton, “but in the end, it will be Congress deciding what to take up.”

Security was tight, with National Guard troops still stationed at the iconic building almost four months after rioters stormed inside, trying to save Trump’s presidency. Five people died in the Jan. 6 riot and its aftermath, including a protester shot by police outside the very House chamber where Biden spoke.

Just about 200 members of Congress were invited to attend, far from the 1,600 people who typically crowd the House chamber on an often celebratory night. Roberts was the only Supreme Court justice there. Only Gen. Mark Milley from the top military brass attended.

While Democratic lawmakers jockeyed for seats, with senators entering a lottery, many Republican lawmakers declined to attend, as they pan the president’s first 100 days in office and cede the evening to the rival party.

Their absence left McConnell and House GOP leader Kevin McCarthy to represent the GOP side of the aisle, which created a lopsided sense of support inside the chamber.

“I’ll have a great seat — right in front of my TV set,” said Sen. John Cornyn, R-Texas, who was staying home.

Still, it’s the rank-and-file members of Congress who will ultimately decide on the size and scope of Biden’s proposed infrastructure and human capital investments in the American Jobs and American Families plans.

At one poignant moment he spoke directly to McConnell, saying he would never forget the time the Republican encouraged him to name a cancer research bill after Biden’s late son, Beau. “It meant a lot,” the president said.

But holding Democrats together or reaching across the aisle to Republicans will prove more daunting on issues including election reforms, gun control, policing law changes and immigration.

McConnell has dismissed Biden’s approach as a “bait and switch” presidency — one that promised bipartisanship with Republicans but that is going it alone with a very Democratic, if not progressive, agenda.

The president’s proposals include massive investments that Republicans argue are stretching the definition of infrastructure — electric vehicle charging stations for the automobiles of the future, as well as the construction of new veterans hospitals, child care center services and other facilities. As investments in families, there are promises of free preschool for 3- and 4-year-old children, free community college and tax breaks that send as much as $250 a month to households with children.

Together, Biden’s two proposals would be paid for by raising the corporate tax rate from 21% to 28% and hiking taxes on the wealthiest 1% of Americans earning above $400,000.

Some Republicans appeared uncomfortable with those ideas, making faces at the tax hikes and sitting stone-faced when Biden spoke of the mob that assaulted the Capitol.

But Biden is also changing the definition of bipartisanship, as his administration argues that the proposals are popular with Republican voters, despite resistance from Republicans on Capitol Hill.

As he stuck around afterward, fist-bumping with Rep. Maxine Waters, D-Calif., a leading advocate of overhauling policing laws, but also shaking hands with Republican Sen. Rob Portman of Ohio, there were signs of Biden’s potential to move legislation.

In that, the president may have had all the audience he was looking for Wednesday as he spoke not just to the lawmakers he needs to pass his agenda, but also to the voters who will influence them to act — or not. 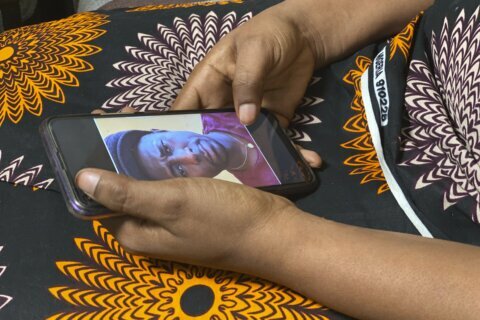