Memorial Day weekend weather: When you’ll have to dodge the raindrops

Pools are finally opening, Memorial Day parades are underway and people in the WTOP listening area are making mad dashes to area beaches. Unfortunately, the temperatures will not be feeling very summerlike and there will be daily storm chances in the D.C. area.
Listen now to WTOP News WTOP.com | Alexa | Google Home | WTOP App | 103.5 FM

WASHINGTON — The unofficial start of summer is upon us. Pools are finally opening, Memorial Day parades are underway and people in the WTOP listening area are making mad dashes to area beaches.

Unfortunately the temperatures will not be feeling very summerlike and there’s the possibility for daily storm chances in the D.C. area. Luckily, it doesn’t mean three straight days of rain, but only occasional batches that we’ll have to dodge.

Early risers on Saturday will see clear skies becoming overcast. An approaching warm front sliding in from the west will be responsible, and it will have a quick shot of some showers and thunderstorms. Then they will taper off and we will stay mostly cloudy the rest of the day, especially north of Washington.

If your in the #DMV this wknd keep an eye our for Storms Sat PM and showers Sun & Mon. #NoWashouts #NBC4DC pic.twitter.com/bMt5Zo01iv

A second batch of scattered storms will develop in the afternoon and evening, but it won’t be raining everywhere at the same time. There is the potential for some of those storms to have gusty winds and hail, but a mitigating factor could be lack of sunshine, and, therefore, lack of energy. But, severe or not, any showers could impact parades, barbecues and the Nationals game against the Padres so keep your eyes on the radar. Also, northern Maryland could be significantly cooler than areas like Fredericksburg and southern Maryland.

We are looking at mostly clouds on Sunday. There could be a few showers in the early morning but expect more showers to move into the area during the afternoon and evening. Once again, some strong storms are possible on Sunday afternoon as a cold front approaches the region. Temperatures will top out in the mid to upper 70s with plenty of clouds. It will feel rather humid again.

Dropped chances on Sunday to around 40% that you will see some showers/storms! Good news for #RollingThunder! pic.twitter.com/94KWSRXO2f

Everybody has about a 60 percent chance of seeing storms where they are on Sunday afternoon. The 30th anniversary of Rolling Thunder could be impacted as well as the last game of the Nationals vs. Padres series.

Keep your fingers crossed for a dry Memorial Day! Right now expect some sunshine with clouds here and there on your Memorial Day with temperatures rising to the lower 80s. There could be a few storms that pop up during the afternoon, but right now there’s only about a 30 percent chance. Therefore there could be a lot of the region that remains dry. Also, with high pressure building to the north, it’s likely that a lot of us will have dropping humidity levels from north to south during the day.

It is not looking like the best of Memorial Day beach weekends but the good news is that it will not be raining the entire time.

If you are headed to Maryland/Delaware beaches this weekend watch for storms Saturday-Smaller afternoon chcs Sun/Mon pic.twitter.com/48FPG1migV

Expect peeks of sunshine through the weekend and into Memorial Day with daily chances of rain. The water temperature is a little cool, only around the 60-degree mark. Temperatures will generally stick in the 70s.

WTOP Traffic: Listen Live and Get the Latest 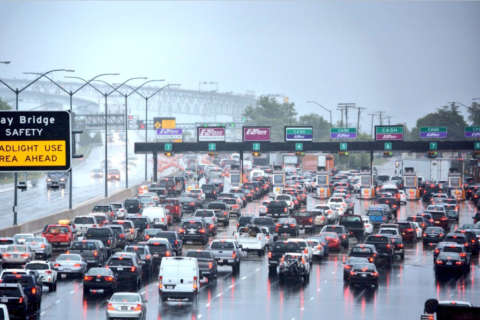