After a brief respite from the wind and rain, another powerful storm system moves into the D.C. area late Thursday and will continue throughout Friday.
Listen now to WTOP News WTOP.com | Alexa | Google Home | WTOP App | 103.5 FM

After a brief respite from the wind and rain, another powerful storm system moves into the D.C. area late Thursday and will continue throughout Friday.

Increasing cloud cover will give way to showers Thursday night and into the predawn hours of Friday, with heavier downpours possible by sunrise.

“Heavy rain and a few thunderstorms will affect the region on Friday, and with a strong onshore flow out of the southeast, there could be flooding along the tidal Potomac and near the Chesapeake Bay,” Storm Team4 meteorologist Mike Stinneford said, adding that 1 to 3 feet of coastal flooding is possible.

Rainfall amounts closer to the D.C. region will be similar to Monday’s storm, with most areas getting between 1.5 to 2.5 inches, Storm Team4 meteorologist Chuck Bell said.

“So take some time today to ensure that gutters and storm drains are clear and that any loose, outdoor items (such as Halloween decorations) are secure,” Bell said.

Bell advised reconsidering any Friday night plans that involve being out on the roads because of the flood risk.

“This storm will also have a great deal of wind energy,” he said. “Alexandria, Annapolis and D.C. should prepare for high water issues. Strong wind gusts of over 40 mph will also be possible along the ridgelines, where tree damage could also cause power-loss problems.”

By 4 p.m. Thursday, the Old Town waterfront area of Alexandria had flooded, and police were advising residents to avoid the area and not try to drive in flood waters.

Be careful if you’re heading down to the Old Town waterfront. There is some flooding on King St., Prince St., Wales Alley & Strand St. Access to King St. & Prince St. is blocked at Union St.

Storms will move out Saturday, although clouds, wind and some passing showers will remain. On Sunday, though, the sunshine returns for Halloween, with afternoon highs in the mid-60s.

Next week will be quieter, sunny and seasonably cool, with temperatures feeling more like November. 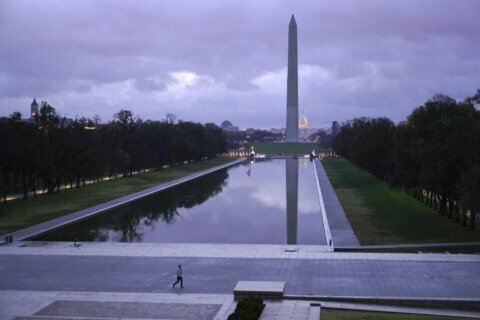 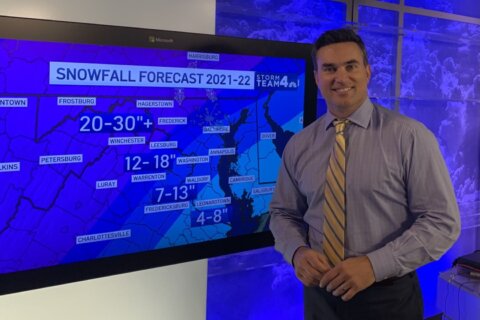