Some scattered storms could roll through the D.C. area through the night. Here's what you need to know.
Listen now to WTOP News WTOP.com | Alexa | Google Home | WTOP App | 103.5 FM
(1/5) 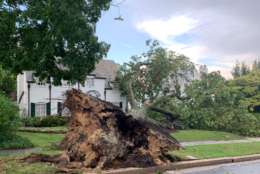 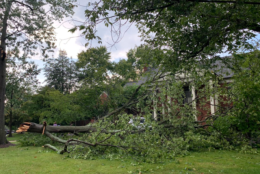 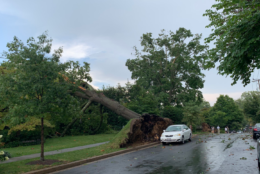 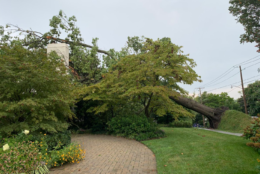 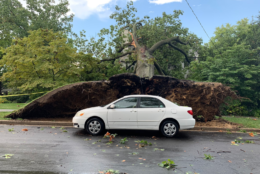 The humidity and scorching temperatures brought thunderstorms Thursday afternoon, in time for the rush hour. Some scattered storms could roll through the D.C. area through the night. Here’s what you need to know.

A thunderstorm popped up about 3:30 p.m. Thursday over Arlington, Virginia, triggering a severe thunderstorm warning for D.C., Arlington County, the city of Alexandria, and parts of Fairfax County in Virginia and parts of Prince George’s and Montgomery counties in Maryland.

The National Weather Service said the storms could cause damaging winds of 60 mph that could cause some large branches to fall.

A few scattered showers and storms will continue to affect the area Thursday night, especially west of D.C., Storm Team4 meteorologist Amelia Draper said. It’s expected to be a muggy night with lows in the 70s.

DC Fire and EMS reported a tree that fell down on a house in Fordham Road in Northwest. The occupants of the house are out, and crews are checking for damage. There were also reports of several trees and wires down in the area.

At least three houses in the Spring Valley neighborhood in Northwest D.C. have been affected by downed trees, WTOP’s Mike Murillo reported from the scene.

Emergency responders went door-to-door to check on residents, and no injuries have been reported so far.

Update 510O block Fordham Rd NW. #DCsBravest confirm trees down on at least 3 homes in area & other trees and wires down. No significant structural damage and no injuries. Treat all downed wires as if live. pic.twitter.com/VO78qKlIM5

Members of the Reynolds family were at home when the storm hit. They called their father saying that a branch had come down.

“It really underscored the size and scale of the damage,” father Kai Reynolds said. Son Hudson Reynolds, 14, said he heard a loud sound and went to the front door. A tree had brushed the family’s car.

Murillo also reported that a tree fell on a bus stop on Massachusetts Avenue. A DC Fire and EMS spokesman said it will be up to weather officials to decide whether straight-line winds or something more that took these trees down.

D.C. police reported some road closures due to a downed tree at northbound 16th Street between Arkansas Avenue and Upshur Street and northbound Georgia Avenue between Jefferson and Kennedy streets.

The WTOP Traffic Center reported trees down along the George Washington Parkway.

This weather pattern will be locked in for the rest of the week.

“On Friday, we will be near heat advisory criteria with a heat index close to 105 degrees,” said Storm Team4 meteorologist Briana Bermensolo. Another round of strong to severe thunderstorms is possible again Friday afternoon and evening.

“Right now, the weekend looks to remain muggy with highs around 90 both days. Some afternoon and evening showers and storms are also possible, but it’s not a washout.”

The humidity is expected to break early next week.

Storm Team4 meteorologist Chuck Bell said the weather pattern will change in part because of an increasing chance of a tropical storm or hurricane developing in the Gulf of Mexico. If it continues to gain strength, it would become Tropical Storm Ida.

“With little to change its course, the storm would spend all weekend moving steadily northwest over the extremely warm, open waters of the Gulf,” Bell said. “An increase to hurricane strength is very likely. Hurricane Ida would be an imminent threat to the Gulf Coast by Sunday evening.”

That potentially includes areas such as Houston to New Orleans.

Meanwhile, Bell said those tropical rains could impact the D.C. area between Tuesday and Thursday of next week.

WTOP’s Abigail Constantino and Glynis Kazanjian contributed to this report.