Risk of flooding recedes in DC area — for now

The warnings and watches have been canceled in the D.C. area after after a Friday of sometimes-heavy rains that led to a raft of warnings and watches. Saturday could be a different story.
Listen now to WTOP News WTOP.com | Alexa | Google Home | WTOP App | 103.5 FM

“Things are back in their banks,” said Storm Team 4 meteorologist Matt Ritter shortly before 5 p.m.; “of course, there’s still a lot of cleanup to do.”

There could be a few light showers, Ritter said, but “we’re not going to see anything that will add to our flooding woes.”

That said, Ritter warned that the threat of another round of rain for Saturday, along with the saturated ground in the area, could lead to more troubles.

“Any storms that manage to pop up could have some heavy downpours, and the ground is already saturated and streams are running high,” Ritter said, “so it won’t take much for more flooding concerns later Saturday.”

The rain that fell throughout Friday morning resulted in flooding around the area, which led to reports of downed trees and submerged cars.

Major road closures during the morning and midday included Beach Drive, in Montgomery County, Maryland; and the George Washington Parkway just south of Chain Bridge, where a tree fell across all four lanes and blocked traffic for more than an hour.

While flash flooding swells and recedes quickly, floods happen because “creeks and streams are out of their banks, and that water’s gonna stay there for a while,” Storm Team 4 meteorologist Mike Stinneford said. Flooding can happen hours after the last rain has fallen.

While the D.C. area enjoyed a brief respite on Thursday from the muggy, unsettled weather, Friday was the ninth day out of the last 10 with rainfall in the D.C. region, Bell said.

Humidity returns just in time for the weekend, creating uncomfortable conditions and the chance of widely scattered or isolated thunderstorms.

“That pattern will continue on into Sunday and Monday with increasing temperatures and sunshine as well as decreasing chances for afternoon storms,” Bell said.

Bell also said to watch for Tropical Storm Henri to become a hurricane within the next 24 hours. The storm is moving 65 miles per hour off the coast of North Carolina and heading northward throughout the weekend. If you plan to go the Maryland or Delaware beaches, Bell said to use extreme caution as powerful rip currents will “be a concern.”

The Fairfax County police are reporting issues with roads in the following areas:

Friday: Cloudy and humid, with scattered afternoon thunderstorms. Highs in the upper 70s to low 80s.

Friday Night: Cloudy and humid with occasional showers. Lows in the upper 60s to mid-70s.

Sunday: Hot and humid, with isolated afternoon thunderstorms. Highs in the mid-80s to 90.

Stay with WTOP for all the latest watches and warnings. 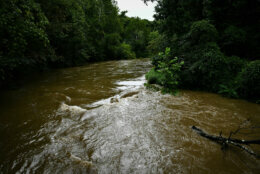 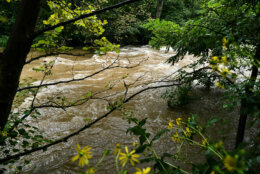 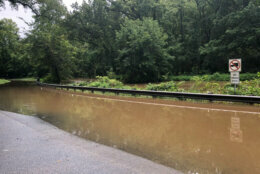 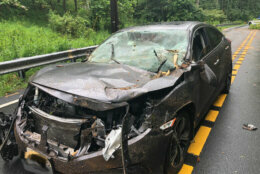 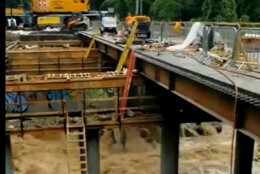 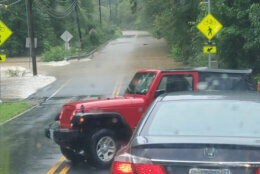 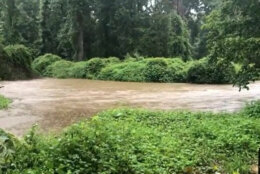 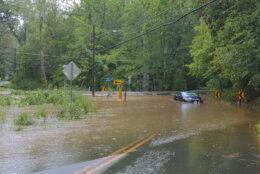 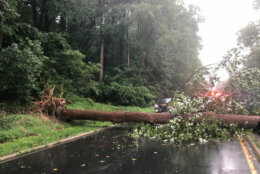