Thousands without power as storms roll through DC region

Following extreme heat and humidity, severe thunderstorms are rolling across the D.C. region Wednesday afternoon. And it's not over yet — Thursday is going to feel like déjà vu.
Listen now to WTOP News WTOP.com | Alexa | Google Home | WTOP App | 103.5 FM
(1/3) 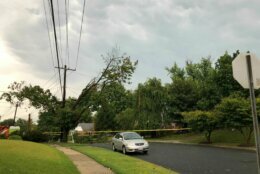 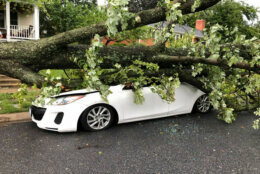 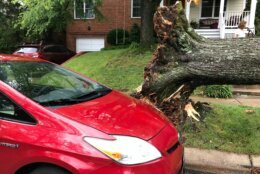 Following extreme heat and humidity, severe thunderstorms rolled across the D.C. region Wednesday afternoon. And it’s not over yet — Thursday is going to feel like déjà vu.

Wednesday’s heat indexes — a measure of the effective air temperature with the added burden of humidity — ranged from 100 degrees west of Interstate 95 to near 105 east of I-95, prompting the National Weather Service to post a Heat Advisory until 8 p.m. for the entire WTOP listening area.

But Thursday’s highs will soar even higher. In an Excessive Heat Watch for Thursday, forecasters note a potential for 110-degree heat indexes along and to the east of the I-95 corridor. Heat-related illnesses are a significant risk for anyone working outdoors or caught in the sun for too long.

“High pressure anchored to our south will pump dangerous levels of heat and humidity into the area for the rest of the week,” Storm Team4 meteorologist Chuck Bell said. “Heat is the No. 1 weather-related killer worldwide every year; stay hydrated and in air conditioning as much as possible.”

The National Weather Service issued severe thunderstorm warnings for parts of D.C., Maryland and Virginia, and warned of considerable damage to trees and large branches that could hurt those outdoors, as well as damage homes and vehicles. Roads could also become blocked by downed trees, the NWS said.

Montgomery County Fire and Rescue Service spokesman Pete Piringer reported several storm-related incidents, including a tree that fell into a vehicle with entrapment, a tree blocking Whisper Wood Lane, and a tree that fell onto a house near Cheshire Drive. He also reported a possible lightning strike on Broad Green Drive near Claggett Farm Drive in Potomac, and a person who was injured by flying debris in Bethesda.

Route 9 is closed in both directions at Daymont Lane due to downed trees.

Learn more about road conditions through 511 Virginia at https://t.co/HoB8mxhoM4. pic.twitter.com/Y4P6OHec2g

In Montgomery County, Daniel Kosogof stared at a massive tree that had just fallen on a car he bought yesterday.

“I thought it was just lightning because I was taking a shower and then I come outside and I’m like, ‘Oh, yeah, that was not lightning.’ That was what was once my car … it’s gone now,” Kosogof said.

There was also a tree blocking the street over on Wildwood Road in Kensington, where firefighters were just leaving the scene to go to another incident.

Kosogof said he was planning ahead with his new purchase because he just got a new job as a high school teacher.

“I need a car. I’m a teacher. School’s starting soon. I’m going to be commuting, you know,” he said.

“I was in the kitchen and all of a sudden, there was a boom — I think it was lightning,” Waites told WTOP. “I didn’t see it, but then I looked out and saw the entire carport had gone down.”

Strong thunderstorms have worked their way across the D.C. region every afternoon this week, a pattern that will hold over the next few days.

Thursday’s storms will be more isolated — contributing to the extreme temperature forecast.

Rain chances climb on Friday night into Saturday with the arrival of a cold front from the interior. Chances of afternoon storms and uncomfortable humidity persist through the weekend, though highs will drop into the upper 80s.

Thursday: Still hazy, hot and humid. Isolated afternoon thunderstorms. Highs in the mid 90s to near 100, with heat indexes up to 110. Excessive Heat Watch in effect from noon to 8 p.m.

Friday: Partly cloudy, hot and humid. Afternoon showers and storms likely. Highs in the mid to upper 90s with heat indexes ranging from 100 to 105.

Saturday: Mostly cloudy, not as hot but still humid. Rain and thunder likely. Highs in the upper 80s.