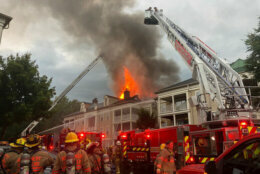 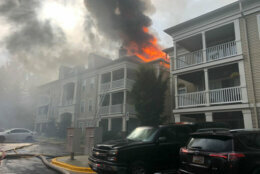 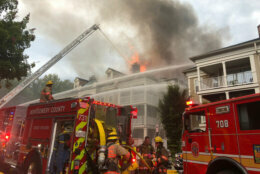 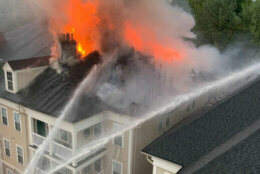 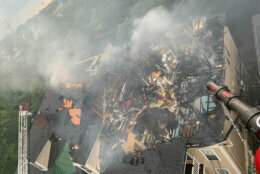 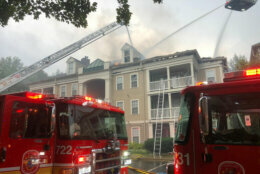 A bolt of lightning struck a Montgomery County, Maryland, apartment building Tuesday, sparking a fire that left about 25 people homeless.

The fire happened on Millhaven Place off Cloppers Mill Drive near Great Seneca Highway in Germantown at about 5 p.m. Fire Chief Scott Goldstein said there was a severe thunderstorm in the area at the time of the fire.

“It appears that a lightning strike may have struck this three-story apartment building,” Goldstein said. “There’s 12 apartments in this building. Crews arrived to find smoke and fire evidence from the top level and went to work extinguishing it.”

Video posted by the fire department shows the fire starting in the attic, which caused the roof to partially collapse. About 80 fire and rescue personnel arrived at the scene to battle the blaze.

Fire spokesman Pete Piringer said on Twitter that smoke alarms were active and alerted residents to leave the building. Crews recovered multiple pets trapped inside the building, including a cat stuck on the third floor. No animals were harmed in the fire.

The fire went on for over three hours. Great Seneca Highway closed all lanes between Mateny Road and Dairymaid Drive as crews battled the flames.

There were no serious injuries reported. However, two firefighters were transported to the hospital with non-life-threatening injuries.

Piringer said the estimated damage is around $2.5 million, including $2 million in structural damage.

Below is a map of where the fire took place.