After damaging storms that swept across the D.C. area Thursday, drier and quieter weather will kick off the weekend. Here's what you need to know.
Listen now to WTOP News WTOP.com | Alexa | Google Home | WTOP App | 103.5 FM
(1/4) 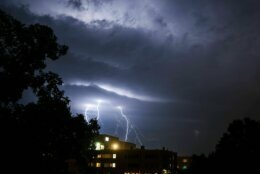 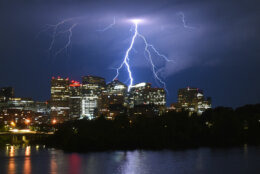 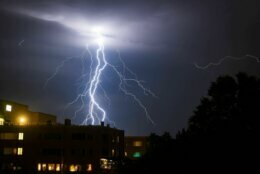 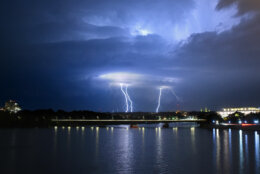 After damaging storms that swept across the D.C. area Thursday, drier and quieter weather will kick off the weekend. Here’s what you need to know.

Although the threat of severe weather has ended, there could still be a stray shower or storm, as a cold front clears the area Thursday night, with lows in the middle 60s to lower 70s, NBC Washington meteorologist Steve Prinzivalli said.

Strong storms moved across the D.C. area Thursday, with some areas receiving torrential downpours, lightning, damaging winds, hail and even a possible tornado.

A tornado watch was issued for most of northern Maryland, which has since expired. Severe thunderstorm and tornado warnings were also issued for parts of the D.C. area throughout Thursday afternoon.

The storms produced several outages in the region. Dominion Energy reported more than 4,900 outages in Northern Virginia, with at least 4,000 of those outages in Stafford County.

Meanwhile, Pepco is reporting at least 1,800 people in Montgomery County, Maryland, without power. At least 1,200 of those outages are in Rockville.

Some of the images coming in from across the county. No reported injuries thus far. pic.twitter.com/PYQApL04IY

In Maryland, Montgomery County police said that Bluhill Road will be closed for several hours due to wires and trees that were down. Montgomery County Fire and Rescue Service said a large tree branch fell onto wires, causing the wires to come down and damaging utility poles.

This front will clear the region by early Friday morning to the south.

Humidity levels will drop throughout Friday and, with breezy winds and plenty of sun, D.C. will finish the workweek on a nice note.

NBC Washington meteorologist Amelia Draper said Friday night will be gorgeous, and Saturday will be spectacular.

Some showers and storms are possible Sunday, especially later in the day and east of Interstate 95.

On Wednesday, lightning zigzagged across the night sky as a round of strong thunderstorms made their way through the D.C. region, with damaging winds downing wires and trees on some major roadways.

The National Weather Service cataloged over a dozen cases of wind-related storm damage from a cluster of thunderstorms that intensified over central Maryland and moved south through Virginia and the District after dark on Wednesday. Hail between a quarter-inch to an inch wide was reported around 9:30 p.m. just east of Gaithersburg.

Saturday: Mostly sunny. Not as hot and much less humid. Highs: mid 80s. 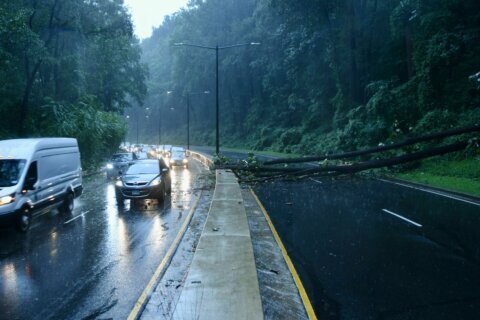