DC leaders say despite flooding, water and sewer system did not fail

"The system did not fail. It filled up as it should have. It did overflow in some areas, as it should have, but this was just a massive storm," DC Water said.
Listen now to WTOP News WTOP.com | Alexa | Google Home | WTOP App | 103.5 FM

D.C. leaders said that despite the widespread flooding from Thursday’s storm, the water and sewer system did not fail.

In a news conference on the city’s response to the flooding, where dozens of people called for help to be rescued from their cars and more than 300 others called to report flooding on their property,  DC Water General Manager David Gadis insisted the system did not fail.

“The system did not fail. It filled up as it should have. It did overflow in some areas, as it should have, but this was just a massive storm. There was nothing else that we could do,” Gadis said.

The rainfall did set a record: 2.88 inches at Reagan National Airport on Thursday, topping a previous record set 50 years ago.

At the height of the storm, water could be seen lifting and flowing out of maintenance holes around the city. Gadis said that happened when the water-processing capacity at the Blue Plains water plant topped its capacity.

Christopher Rodriguez, director of D.C.’s Homeland Security and Emergency Management Agency, said in all, there were 46 water rescues, and in six of those cases, boats had to be used. There were no injuries.

A $580 million tunnel project, designed to help alleviate flooding near the areas most affected, has been in construction since 2017 and should be complete by 2023. 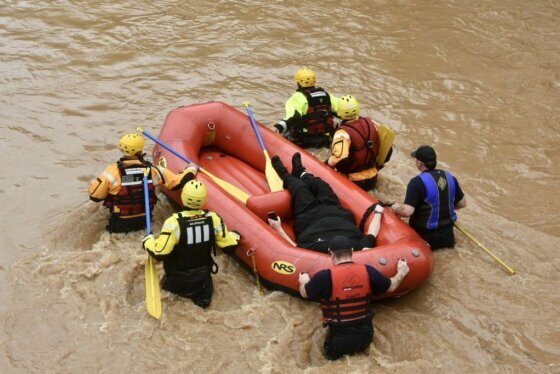 Drenching downpours Thursday in the D.C. area led to dramatic rescues of several dozen stranded drivers from submerged roadways. And in Montgomery County, a stretch of Colesville Road remains closed overnight. Here’s what you need to know.