It was a stormy and steamy day Tuesday, and Wednesday will again be sweltering in the D.C. area, with isolated afternoon and evening thunderstorms.
Listen now to WTOP News WTOP.com | Alexa | Google Home | WTOP App | 103.5 FM

It was a stormy and steamy day Tuesday, and Wednesday will again be sweltering in the D.C. area, with isolated afternoon and evening thunderstorms.

Not all areas saw storms but those localities that did experienced some flooding downpours, Storm Team4 meteorologist Mike Stinneford said.

In Maryland, a flood warning has been issued until 7:30 a.m. in east central Prince George’s County.

On Tuesday, the mercury reached a high of 90 degrees at Reagan National Airport, with a heat index reading of 99.

Unfortunately, there’s no significant cool-off on the way: The 10-day forecast doesn’t see a daily high temperature that’s chillier than 85.

Wednesday brings sunshine and more hot temperatures with a chance for isolated storms and showers in the afternoon. Temperatures on Thursday will again be in the 90s with a mixture of sun and clouds throughout the day.

Friday could see the arrival of a significant storm system that has been moving through the Deep South, according to Storm Team4 meteorologist Lauryn Ricketts. The system is currently heading toward the coastal regions of the Carolinas and could bring heavy rains Friday and into Saturday.

Tuesday’s hot and stormy weather has been a trend, so far this week. The storm system that rocked the D.C. region late Monday left a good deal of flooding and over 10,000 people without power.

Some areas in southern Maryland saw enough flooding to wash away sections of the road.

There is significant damage from last night’s storm in St. Mary’s County. Pictures are from Moakley Street and Morganza Turner Road. Do NOT drive through standing or moving water, it could be very deep and dangerous. pic.twitter.com/W9gK7jZXR2

Pepco reported that storms had brought down power lines in the region.

Thursday: Mostly to partly sunny and muggy. Temps around 90.

Friday: Mostly to partly cloudy with a chance for rain. Temperatures around 90.


WTOP’s Abigail Constantino and Jack Pointer contributed to this report. 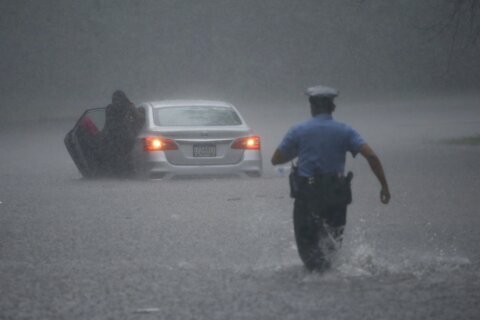 Tropic storm Isaias whips up eastern US, killing at least 6 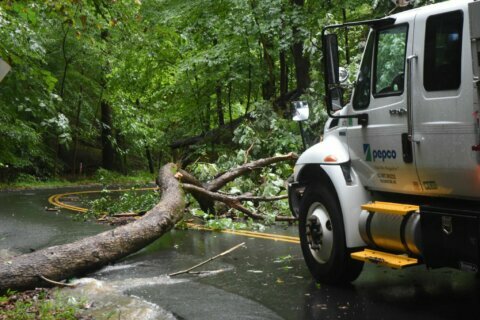