Monday’s severe weather brought with it a tornado in Maryland’s Caroline County.

The National Weather Service confirmed that a weak tornado touched down just north of Baltimore Corner, at around 3:30 p.m. Monday. Baltimore Corner is 15 miles north of Denton, in the Eastern Shore county.

We have determined that an EF-0 tornado touched down yesterday afternoon during severe thunderstorms in Caroline County, MD. See the attached Public Information Statement and the graphic below for more! https://t.co/4BYFpyx8Ab #MDwx pic.twitter.com/DE2ASfmLZ3

The EF-0 tornado, which had a maximum estimated wind gust of 80 mph at its peak, moved in an east to northeast direction for about 5 miles before it left the ground just south of Henderson, Maryland. EF-0 tornadoes have a speed between 65 mph to 85 mph.

Several trees in its path were snapped or uprooted in a sporadic pattern, the weather service said. No injuries were reported.

The National Weather Service tweeted that the rainfall at Dulles International Airport measured at 1.79 inches, breaking the record of 0.93 inches in 1972. At BWI Marshall Airport, the 1.97 inches broke the old record of 1.46 inches, also from 1972.

Reagan National Airport saw the most rain of the three airports, measuring at 2.33 inches, more than doubling the previous record of 1.16 inches in 1961. 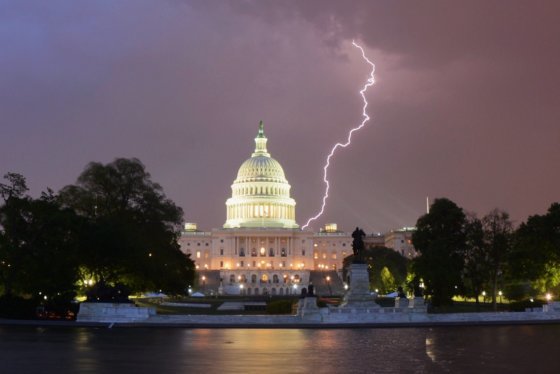 The National Weather Service has issued a tornado watch until 6 p.m. as severe weather is poised to return for a second round in the D.C. region on Monday afternoon.