Will there be snow on Christmas? A look at the DC area’s forecast

By this point, it has been pretty well-advertised that there is no chance of a white Christmas in the D.C. area this year. Here's the Christmas weather outlook.
Listen now to WTOP News WTOP.com | Alexa | Google Home | WTOP App | 103.5 FM
(1/4) 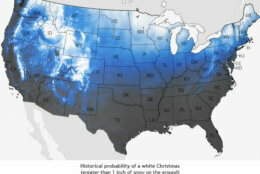 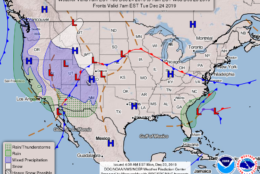 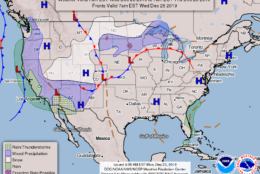 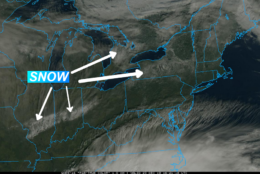 By this point, it has been pretty well-advertised that there is no chance of a white Christmas in the D.C. area this year.

The commonly accepted definition of a white Christmas is having more than an inch of snow on the ground on Dec. 25. It does not necessarily have to be snowing on the date; but if it is, it has to accumulate over an inch.

Well, not only is there no chance of that because it is not going to snow anytime before and on Christmas Day, it’s going to simply be too mild — and dry.

Historically, the odds of having a white Christmas in the D.C. area are not very high anyway.

According to the National Climatic Data Center, the area has around a 10-15% probability in any year, based on 1981-2010 climatology.

The odds of it actually snowing on Christmas Day are even worse: Since 1884 (the start of records for D.C.), there have been only nine times when there’s been measurable snow on Christmas Day, according to the National Weather Service.

The last time there was a white Christmas for D.C. was 2009, when there was still snow on the ground — 7 inches — that was left over from the storm on Dec. 18-19, remembered locally as “Snowpocalypse.” The National Weather Service pointed out that all of that Christmas snow melted the next morning.

The current slow-moving weather pattern will keep most of this week uneventful, so at least weather won’t interfere with last-minute shoppers, or even with local or regional travel.

Just about all of the active weather, whether it be rain or wintry mix, will be in the Rockies to the West Coast, even including some of the Southwest.

For the D.C. area, Storm Team 4 is forecasting mainly clear skies for Christmas Eve and temperatures near 40 at midnight, followed by mostly sunny skies during the day on Christmas.

Highs will be well above average in the low to mid-50s.

The next chance for any precipitation at all won’t be until over the weekend, when there could be some showers.

And what about New Year’s? Well, it could get wet, with soaking rain in the forecast.

Wet weather lightens up Friday, but persists into weekend