The Flash Flood Emergency has been lifted for the D.C. area, but flooding will remain a problem for the rest of the day - and in the case of damaged roads and houses, even longer. Stick with WTOP for the latest.
Listen now to WTOP News WTOP.com | Alexa | Google Home | WTOP App | 103.5 FM
(1/4) 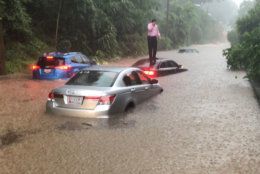 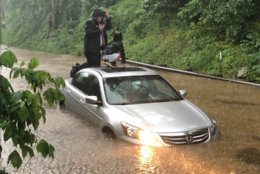 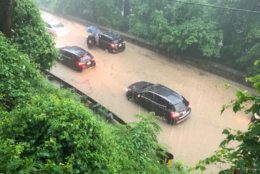 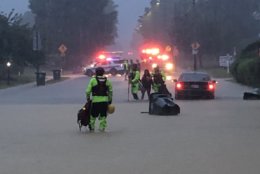 The worst of the rain and flooding is over in the D.C. area, but the water is receding very slowly, showers are lingering and dangers remain after a torrential rainstorm Monday morning left roads flooded, drivers stranded and several Metro stations a mess.

The National Weather Service at 1 p.m. lifted the Flash Flood Warnings that had been in effect for the D.C. metro area for most of the morning, but they’ve been replaced by regular Flood Warnings, which will last until 9 p.m. in D.C.

That only means that “the floodwaters are not rising rapidly anymore … but the flooding is still there,” said Storm Team4 meteorologist Matt Ritter. Waters can still continue to rise, he said; just not as rapidly as in the morning.

“The areas that are still seeing problems, [they] will continue for the rest of the afternoon into the evening rush,” Ritter added.

Speaking of the evening rush, D.C.’s Homeland Security and Emergency Management Agency at about 3:45 p.m. released a list of closed roads in the District:

Downed power lines are a problem across the area, and Pepco reminds residents to treat all lines as live and dangerous.

National Weather Service meteorologist Cody Ledbetter said the storm dumped about 6.3 inches of rain near Frederick, Maryland, about 4.5 inches near Arlington, Virginia, and about 3.4 inches at Ronald Reagan Washington National Airport in a two-hour period.

“The storm was not moving very quickly,” Ledbetter said.

Water levels at Cameron Run in Alexandria, Virginia, a flood-prone area along the Capital Beltway, rose more than 7 feet over 30 minutes after 9 a.m., according to the weather service. Four Mile Run, which runs through Arlington and Alexandria, saw a similar increase.

Many roads were closed in the area, including the Clara Barton Parkway, Canal Road in D.C. and more, and some still are. Check the list.

The National Weather Service issued a Flash Flood Emergency — a rare warning reserved for exceptionally severe and life-threatening urban flood events — Monday morning; it expired later in the morning. “IMMEDIATE ACTION IS REQUIRED TO SAVE YOUR LIFE!,” the weather service said, in an all-caps alert.

At about 12:30 p.m., Piringer stood on Coach Street, in the River Falls area of Potomac, Maryland, and said, “There are fences where fences usually aren’t, and fences are missing where they usually are.” Cars were in the middle of the road, where some had been flooded up to their roofs.

Taylor Blunt, with the Arlington County Fire Department, said that while the roadways were starting to clear as of 11:10 a.m., road debris and stranded cars were posing a new challenge.

Scary exit from the parking garage under the Capitals Ice Rink / Ballston Commons Mall in Arlington. The bottom level is a River! ⁦@WTOP⁩ ⁦@WTOPtraffic⁩ ⁦@ABC7News⁩ pic.twitter.com/exleKNbpEw

‘It happens in a hurry’

WTOP’s Dave Dildine has covered flooding before, including the devastation in Ellicott City in 2016 and 2018, but speaking about the water rescues he saw on Canal Road in Northwest D.C. Monday morning, he said he is still “totally surprised by how quickly this occurs. … It was beyond dramatic; it was downright scary.”

The term “flash flooding” is no joke, he said. “It really happens in a flash, and that’s why it’s so dangerous. … When runoff starts going, it happens in a hurry.”

And then, “Just as fast as [the water] rose, it receded,” he said. As he spoke, he noted that more rain was beginning to fall.

Those who were stranded are being safely escorted off of Canal Road by @dcfireems. Everyone else swam or walked to higher ground on their own. Water slowly receding now. Flash Flood Warnings are a big deal. #DCWX pic.twitter.com/ry80Ls1hfg

In Frederick, Maryland, a 50-year resident told WTOP’s Nick Iannelli that the flooding was “the worst I’ve seen it,” and described “river after river after river overflowing.” In Baker Park, Iannelli said, the water reached up to the seat of a park bench, and halfway up a soccer goal. The police were telling people to stay off the roads if at all possible, and releasing lists of flooded roads, “but they can’t keep up.”

Various flood-related issues were reported on both the inner and outer loops of the Capital Beltway. The Clara Barton Parkway disappeared under muddy waters. Reports of water rescues from inundated vehicles became so frequent for a time, they were difficult to keep track of.

“It only takes a couple of inches of moving, swift water to move your car out of the way,” Piringer told WTOP at about 1:30 p.m. It’s not just that you don’t know how deep the water is, he said; you don’t know the condition of the road underneath.

The worst of the rain may have passed, but the threat of flooding remains. Storm Team4 meteorologist Mike Stinneford told WTOP Monday morning that the heaviest storms headed south.

“All of this [water] has to go somewhere,” he said; “It’s going to take a while for this to run off.” Rock Creek could see a rise of several feet as the day moves on, he added.

Downed trees and mudslides are also impacting commutes and causing dangerous situations around the region. Thousands are experiencing power outages.

“It’s important for motorists not to drive through standing water,” D.C. Mayor Muriel Bowser told WTOP. “Give our crews the road to work.”

Bowser said residents should report standing water to 311, and any emergencies to 911. If you have any choice, “Try to stay put,” she said. Anyone already out should plan ahead for their evening commute, the mayor said; District authorities will post on social media when they know what to expect on the roads as water recedes.

The Metro was hit hard in the middle of morning rush hour. Videos posted to social media appeared to show water bursting through the roof of the Virginia Square-GMU Metro station and pouring down the elevator shaft at Pentagon Metro.

In Bethesda, an NBC Washington photographer witnessed a father rescue his daughters from rising floodwaters.

Foul weather will taper off by Monday evening as a frontal boundary moves south, taking the rain along with it. Tuesday and Wednesday will be more reliably dry but hot, before another disturbed weather pattern moves in late this week.

All eyes turn to the south next weekend, where forecast models are hinting at a possible tropical cyclone in the Gulf of Mexico.

Long-range forecasts are hardly a given, but any storm that does develop in the Gulf will need to be monitored for weather impacts in the D.C. region early next week.

The U.S. National Archives tweeted that flooding caused electrical issues in the main power vault, knocking out power throughout the building.

The building is equipped with flood walls which successfully deployed and protected the one-of-a-kind artifacts and documents — including the Declaration of Independence — that are housed inside the Archives building.

The Archives building will be closed Tuesday, July 9, while crews conduct repairs. There will also be no shuttle service to the National Archives in College Park, Maryland.

Maryland resident Jeremy Gagliardi told WTOP that the basement at his mother’s house on Coach Street in Potomac, Maryland, filled with flood water and two cars parked in the driveway floated out towards the street.

“Both engines are full of mud,” Gagliardi said. “There was a truck behind us … that ran into the flood and before he could pull backwards he floated all the way to the front of our mailbox — he had to climb out the window.”

Monday: Showers and a few thunderstorms, tapering off this afternoon. Rain may be heavy at times.
Highs: Upper 70s to low 80s 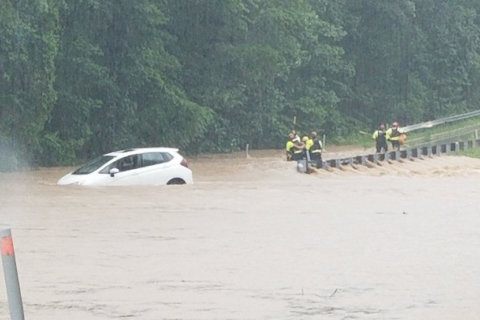 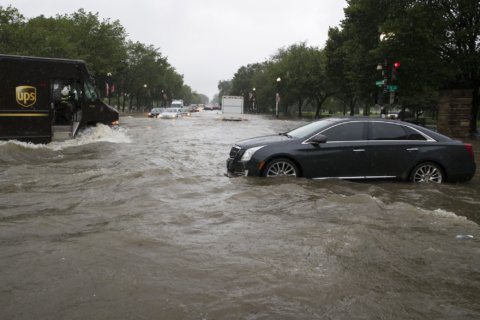 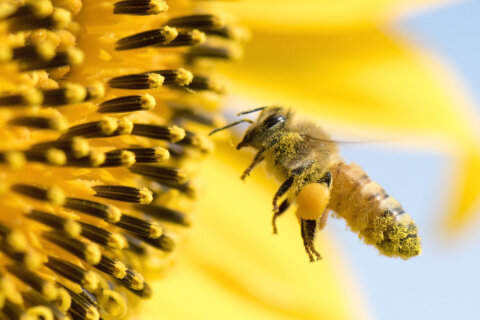 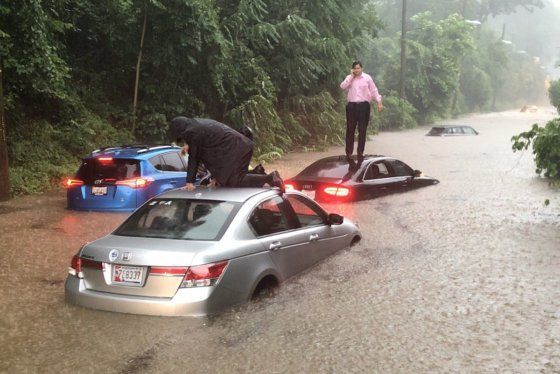