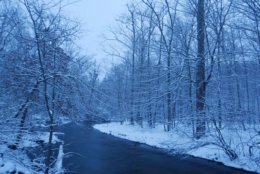 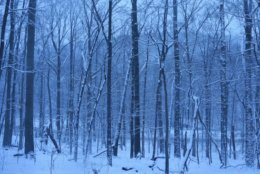 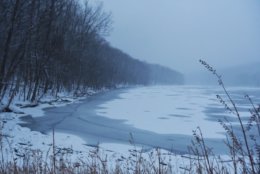 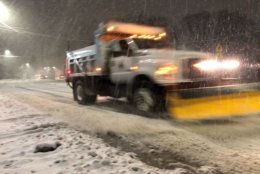 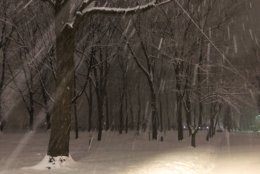 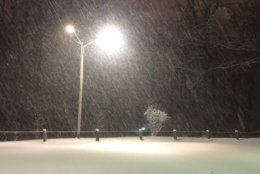 Sunday’s late-season winter storm shaped up to be a non-event for the immediate D.C. metro area, with significant snowfall limited to central Maryland and Northern Virginia.

But even if the storm may have brought less snow and more rain than first thought, slick roadways could still make for some travel difficulties on untreated roadways, with overnight temperatures hovering at or below freezing and a breeze pushing cold air into the region through Wednesday.

Simply put: In a titanic tug of war between warm and cold air masses, the warm air eked out a victory. Especially in late season storms, a minor shift in the rain-snow line can make a world of difference for snow accumulation — and on Sunday afternoon, that’s exactly what happened.

“The warmer air and northward shift of the mix line resulted in lower snow totals.”

As a result, the coating to an inch of snow expected for D.C. never even materialized. The nation’s capital and areas south and east remained too warm for snow or sleet to fall, and most areas outside of central Maryland and the higher elevations of Northern Virginia saw nothing but rain.

It was a non-event for D.C., but some residents of northern Maryland are waking up to several inches of snow where the storm played out closer to what was forecast.

Much of Carroll and Washington counties reported 4 to 5 inches of snow by the time all was said and done around midnight, with isolated reports of over 7 inches along the Pennsylvania state line.

The following are unofficial observations reported to the National Weather Service as of 1 a.m. Monday.

For the latest road and traffic conditions, head to the WTOP Traffic Center.

All MARC train lines were operating normally. Commuters on the Brunswick Line should be aware that service may be reduced or modified depending on snow totals on the western end of the line. Passengers will be notified of any service changes.

As the low pressure system that caused this weekend mess ejects over the open Atlantic Ocean, it’ll rapidly deepen — meaning winds are about to pick up on the East Coast, pulling in a cooler-than-average air mass than what would be expected for early March.

Monday will be breezy and cold, and morning temperatures were hovering at or just below freezing across most of the capital region.

Likewise, some icing is possible on untreated streets and highways during Monday commute. Even though the storm is gone and winter weather advisories have been canceled, drivers should use still use caution on the roads Monday morning.

“As colder air pushes in and temperatures drop to and below freezing, those surfaces that remain wet and untreated will refreeze, resulting in potentially slippery conditions for the morning commute,” the weather service said.

“The return of sunshine will be much appreciated, but it will come at quite a cost,” NBC Washington meteorologist Chuck Bell said. “Temperatures for the first full week of March will be running about 15 to 20 degrees colder than average.”

The coldest of the cold won’t arrive until Wednesday morning, when overnight lows will dive into the teens and wind chills will make it feel like single digits. An approaching zone of high pressure and presence of the strengthening storm over the open sea will keep winds blustery for most of the week.

Punxsutawney Phil’s forecast of an early spring is on thin ice these days. Evidently, D.C.’s own Potomac Phil is the real winner here.

Monday: Cloudy in the morning, clearing in the afternoon. Breezy and cold. Highs in the mid- to upper 30s.

Tuesday: Sunny in the morning, some afternoon clouds. Highs in the mid- to upper 30s.

Wednesday: Mostly to partly sunny, still breezy. Wind chills in the teens. Highs in the upper 20s to low 30s.