The snow is slowly changing over to sleet and rain across the D.C. area, but roads are still dangerous. One school system has already decided to close early. Here's the latest, including snow totals and the latest tracking of the "meandering" rain/snow line.
Listen now to WTOP News WTOP.com | Alexa | Google Home | WTOP App | 103.5 FM

WASHINGTON — The D.C. area’s first snow of the season made trouble on the roads all through the day Thursday. Commuters have had a cold, wet and dangerous trip in the morning and the evening; accidents are stacked up all over the region, and the gradual changeover to rain isn’t making things much better, especially north and west of D.C.

A Winter Weather Advisory was in effect for the entire D.C. area for much of the day. Fauquier and Culpeper counties in Virginia are still under that advisory until midnight; in Loudoun County and the Shenandoah Valley in Virginia, and Frederick, Carroll and northern Montgomery counties in Maryland, a Winter Storm Warning will be in effect until 4 a.m. Friday.

For the rest of the afternoon and evening, there’s snow, sleet and freezing rain north and west of the District, and rain elsewhere, said Storm Team 4 meteorologist Mike Stinneford.

The snow is still falling between Germantown and Frederick, Maryland, around Interstate 270, Stinneford said. Between Frederick and Front Royal, they’re getting sleet on top of snow – “kind of like little ball bearings,” Stinneford said.

Snow totals at about 3 p.m., provided by Stinneford:

The area might get a bit of freezing rain, sleet or snow late Thursday night as temperatures drop back into the 30s.

The weather closed and delayed many school systems Thursday, and they’re starting to make decisions about Friday too. You can check out all the closings and delays.

The worst road conditions, like the worst weather conditions, are around I-270 and I-70, said Bob Marbourg in WTOP’s Traffic Center. With a lot of slush on the roads as of 5:45 p.m., traffic is barely moving around the intersection of those two roads.

East of the District, roads are simply wet – which still poses a set of challenges, Marbourg said.

The Maryland State Police said they responded to 97 crashes and assisted with 14 disabled vehicles between 6 and 10 a.m.

“A lot of people didn’t think the snow would materialize this early in the year. It’s a little bit of a shock value,” said Ellen Kamilakis, with the Virginia Department of Transportation. “We ask people to slow down, to add in more time to their commutes, to not underestimate things. Don’t drive like it’s a fall day; drive like this is a winter day.” 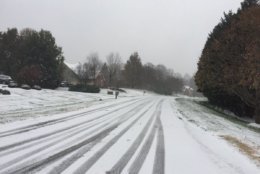 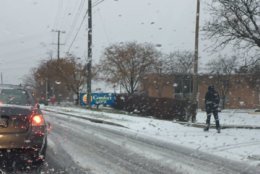 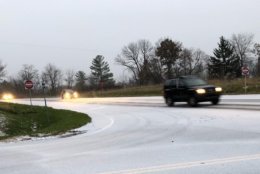 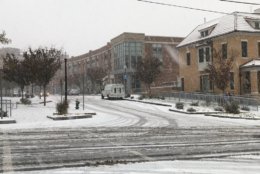 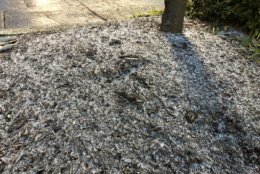 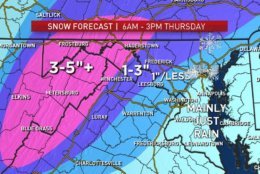 As of 5 p.m. in Fairfax County, Hillview Avenue is closed between Ronson Drive and Telegraph Road.

Area airports are open and operating.

Several school systems have announced that they will open two hours late Friday. See WTOP’s Closings and Delays page for the latest updates.

What to expect Thursday evening

There could be some sleet, snow and freezing rain in the area, said Storm Team 4 meteorologist Mike Stinneford.

On Thursday night, there’s a chance that the rain will briefly change back over to snow for the Shenandoah Valley and northern Maryland before ending very early Friday morning.

The weekend and much of next week is expected to be chilly, but without all the precipitation this Thursday is bringing.

Rain, with a chance of bit more of a wintry mix late at night. 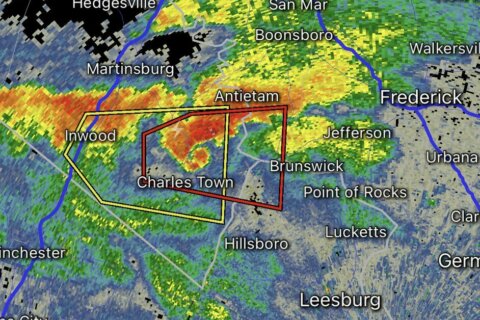 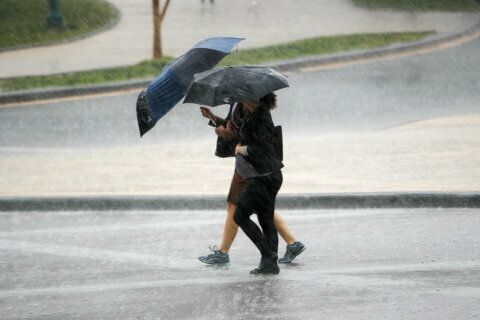 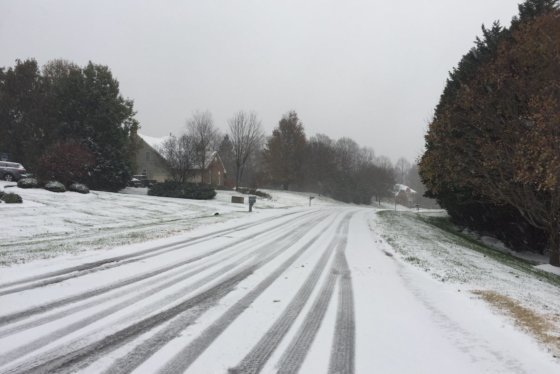