Despite the lack of big weather events, it's actually going to be quite comfortable for most of the workweek. But by Friday, it will start getting uncomfortably humid again.
Listen now to WTOP News WTOP.com | Alexa | Google Home | WTOP App | 103.5 FM
(1/8) 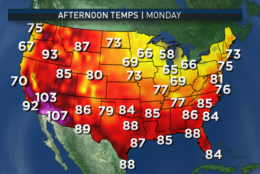 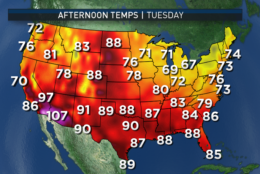 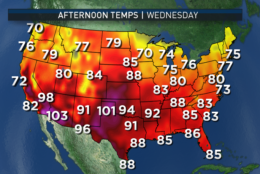 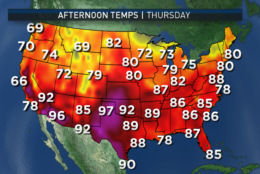 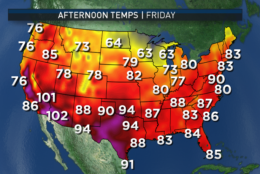 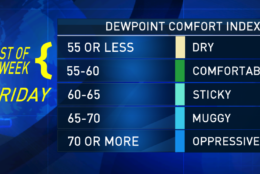 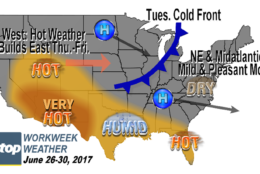 WASHINGTON — Oftentimes, meteorologists talk about summer doldrums, implying that the weather won’t be changing much day to day in a certain pattern. But that’s usually a hazy, hot and humid pattern in which there’s rarely anything happening except pop-up thunderstorms in the late daytime heating. Not this week.

Despite the lack of big weather events, it’s actually going to be quite comfortable for most of the workweek. It will also be a great time to be outdoors for work and play, including the Nationals’ continued homestand, this time four games against the Cubs, Monday through Thursday.

High pressure building into the southeast U.S. will already be bringing us mostly clear skies to start out Monday. With mostly westerly flow, the dry weather we had on Sunday will continue. Without enough moisture for the atmosphere to lift during the daytime heating, we’ll not see much more than fair weather cumulus clouds the rest of the day. Temperatures will be close to seasonable averages, but the humidity will be in the comfortable range. (In fact, it’s really not until the end of the week that it will start to feel muggy or even just sticky.)

A new area of high pressure coming from central Canada will push a weak, decaying cold front through the area on Tuesday with nothing more than a few hours of clouds and a chance of showers, especially in northern Maryland up into central Pennsylvania. With the clouds and the cooler air behind the front, some spots of northern Maryland and West Virginia may not make it out of the 70s for highs.

So, the D.C. area and everyone else getting to right around 80 is still considered below average. The dry air, clear skies and calming breezes will ensure a very cool Wednesday morning, and some of the far northern and western suburbs conceivably could end up in the upper 40s. However, most of us will only bottom out in the low to mid 50s, still giving a rest to the air conditioners. Wednesday will be the best day of the week with the high pressure center directly overhead. We should have almost full sunshine, seasonable temperatures and continued low humidity.

But the rest of the week will have the ridge of high pressure shifting just off the eastern seaboard, setting us up for a southwesterly flow in the jet stream winds and at the surface. That means some of the extreme heat that’s been in the West and the humidity near the Gulf Coast will start heading back here. No, the region won’t be getting the extreme heat of the Southwest that has made recent news headlines, just typical D.C.-area summertime hot weather.

By Friday especially, it will start getting uncomfortably humid again.

This pattern shift will be another “Bermuda high” and we may have a new heat wave starting for the weekend.

TUESDAY
— Some sun early then increasing clouds
— A bit breezy
— An isolated shower or a few scattered showers/thunderstorms, most likely north of D.C.
— Cooler than average temperatures, especially in the northern and western suburbs
— Cooling off quickly after sunset

WEDNESDAY
— Very cool start, especially in the suburbs
— Warming up quickly after sunrise, but staying slightly below average
— Almost total sunshine all day

THURSDAY
— High-level clouds, otherwise mostly sunny
— Heating up again, near the 90-degree mark
— Humidity creeping up again, but still tolerable for most folks

FRIDAY
— “The three Hs” return: hazy, hot and humid
— Most spots in the low 90s
— Humidity back to borderline sticky and muggy levels
— A slight risk of a late-day thunderstorm