Workweek weather: Some muggy, wet weather for this week

WASHINGTON — The region has seen drastic improvements in the drought situation in the past month, and there is going to be even more rain this week thanks to three distinct waves of low pressure and a generous flow of moisture from the Gulf of Mexico.

The first storm system will have already brought showers and drizzle in late Sunday night into Monday morning. These will be in advance of a warm front, which will pass through the area during the day. Humidity will rise to somewhat uncomfortable levels when that happens and temperatures will also warm. Then, as the first storm system’s center of low pressure pulls away, a cold front will be dragged through, causing some additional scattered thunderstorms late in the day Monday. High pressure and westerly winds will dry things out Monday night and Tuesday morning with a big drop in humidity.

The same frontal boundary will be held up by a new wave of low pressure developing on its southern end, and that low will be poised to move back up the mountains with the boundary as a warm front, bringing us a chance for more rain later Tuesday into possibly Wednesday morning. There is considerable disagreement in the various computer models about how far north the front will make it, and that could have an impact on temperatures. Right now, Storm Team 4 believes the front will stay farther south, keeping us somewhat cool still with this round of rain. But it will start to feel humid again.

Yet another system being steered by the jet stream will come down from central Canada and the Plains and form a “cut off” upper low late Wednesday into Thursday. This will be a chance for even more rain. That system will move right along and depart on Friday, followed by more drying out.

Depending on the exact timing of each batch of rain, one or more Nationals games could be affected during the new homestand, which starts Tuesday. In patterns like these, there could be significant day-to-day changes in the start and end times for the batches of rain.

As previously mentioned, the latest Drought Monitor report from the Drought Mitigation Center confirms that the area is no longer in a drought, either short or long term. The topsoil and the waterways have responded well to the rainfall in recent weeks. There are only a few areas of “abnormally dry” ground. Even those areas will likely see improvement this week. 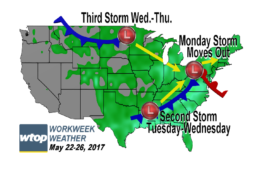 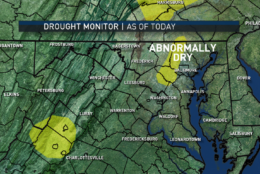 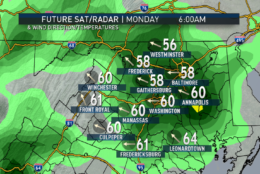 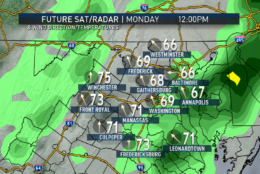 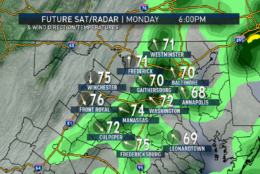 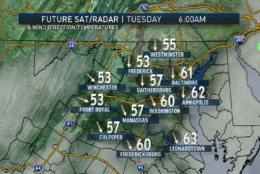 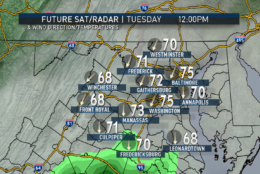 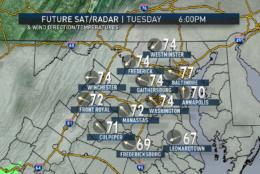 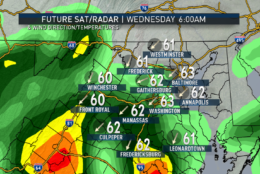 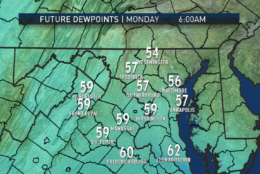 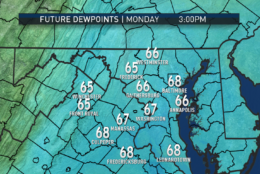 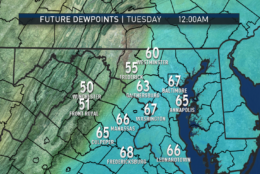 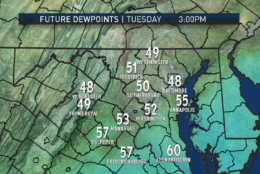 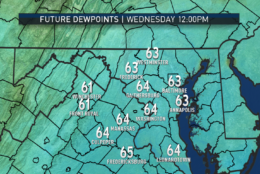 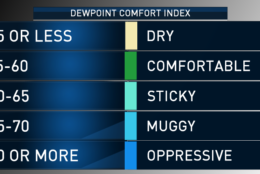 MONDAY
• Cloudy, damp and cool with showers and drizzle in the morning
• Peeks of sun through clouds
• Feeling warmer and much more humid
• Scattered late-day thunderstorms
• Becoming less humid toward nighttime