Dave’s Take: Injuries took a toll on ‘Skins, but the problems are structural

Once again, the Redskins are into their offseason early. They have missed the playoffs 15 of the last 20 seasons, and WTOP Senior Sports Director Dave Johnson believes that makes the challenge ahead even more difficult.

WASHINGTON — A 24-0 loss at home to the Eagles was a harsh fade to black on a Redskins season that once had so much light.

Is the team close to success, as head coach Jay Gruden believes, or is the team stuck in cul-de-sac of confusion?

Once upon a time, and in a land — well, not far, far away, the Redskins were on top of the NFC East. The team was alone in first place Nov. 18. That was Week 11 of the NFL season, when the Redskins lost to the Texans and lost their starting quarterback Alex Smith to a broken leg.

It is all a bit of blur after that, but included the loss of another quarterback, Colt McCoy, to another broken leg. In all, 24 players were placed on injured reserve.

But there is no defense for the defense. The lineup was consistent on that side of the ball, but the performances were not. (In fairness, it might have been hard to be on as a defense when it was hard to get off the field as the Redskins offense struggled to move the ball.)

Running back Adrian Peterson, who may or may not come back next season, believes in Gruden and said he does what some coaches don’t — hold players accountable. That’s a strong endorsement, because future Hall of Famers do not suffer fools gladly.

There is not a quick fix here. Firing Gruden would not solve all the problems. It is about culture not coaching; not superficial, but structural. The Redskins have to change as an organization.

Sadly, there is no indication that dramatic change is about to happen. 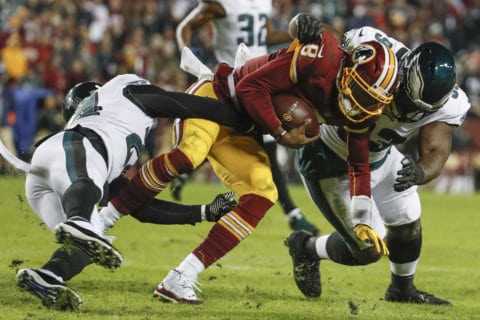 After a 7-9 finish, Redskins face a lot of questions heading into the offseason