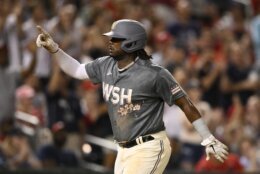 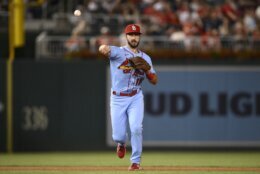 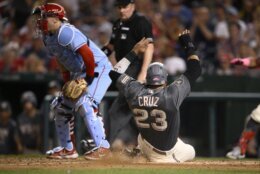 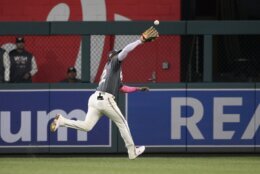 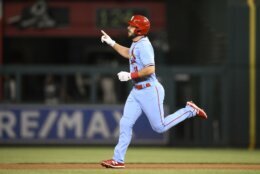 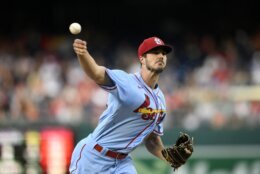 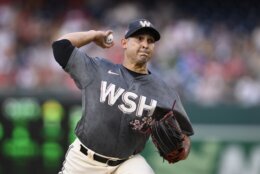 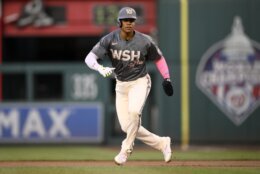 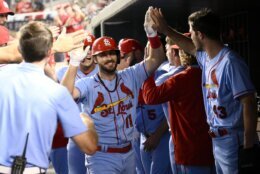 WASHINGTON (AP) — If Josh Bell’s days are indeed numbered in Washington in his second season as a member of the struggling Nationals, he gave the home fans one last moment to celebrate.

Bell hit a three-run homer in the seventh inning and the Nationals rallied to beat the St. Louis Cardinals 7-6 on Saturday night.

Bell, likely on his way out as the Major League Baseball trade deadline nears, knocked in his 14th homer of the season to right-center off Génesis Cabrera (3-2) to complete Washington’s comeback.

Bell, who turns 30 next month and will be a free agent after the season, is having one of his best seasons and leads the Nationals with 57 RBIs and is batting .305 in 101 games.

“I’m not going to think about what’s going to happen in the next few days,” manager Dave Martinez said. “It was a big win for us and he was a big part of it and we have to come back tomorrow and do it again.”

Juan Soto, who could be the biggest name dealt before next week’s deadline, finished 1 for 1 with three walks and scored twice for Washington, which has the worst record in baseball.

“Juan is locked in right now and it’s a lot of fun to play behind him,” Bell said.

The big question is how long will Bell be playing behind his teammate that finished second in the NL MVP voting last season.

Erasmo Ramírez (3-1) earned the win with a clean seventh, and Kyle Finnegan got the last five outs for his fourth save of the season.

St. Louis, which started the day even with Philadelphia for the last wild card spot in the NL, took the lead in the fifth for the second time when Paul DeJong hit a two-run homer into the Cardinals’ bullpen.

Gone for over two months, DeJong — an All-Star in 2019 — was recalled earlier on Saturday after the Cardinals traded infielder Edmundo Sosa to the Phillies in exchange for left-hander JoJo Romero. St. Louis made room for DeJong from the taxi squad by sending Romero to Triple-A Memphis.

DeJong was optioned to the minors back on May 10 after struggling to hit .130 with one homer through 24 games. The 28-year-old since regained his form in Memphis by hitting 17 homers and driving in 54 RBIs in 51 games at the lower level. He had homered in three straight games before Saturday’s promotion.

The Nationals scored three in the fifth — all with two-outs — to tie the score at 4-4. Nelson Cruz hit a two-run RBI double before Yadiel Hernandez RBI single up the middle.

Lars Nootbaar gave St. Louis their final lead with a sacrifice fly in the sixth before Bell’s blast.

Nolan Arenado hit his 19th homer of the season in the second. It was his first since July 13.

Cardinals: LF Tyler O’Neill left the game after the fourth inning with leg cramps. O’Neill singled and doubled in his two at-bats. … C Yadier Molina (right knee inflammation) went 1 for 2 with a walk in five innings with Triple-A Memphis.

Nationals: RHP Erick Fedde was a late scratch after an MRI showed right shoulder inflammation. Fedde, who is 5-7 with a 4.95 ERA in 19 starts this season, was placed on the 15-day injured list retroactive to July 27. … CF Victor Robles, who hit his fourth homer of the season in the third, left late with leg cramps….Washington recalled RHP Cory Abbot from Triple-A Rochester. Martinez said that the 26-year-old Abbot could be in line to start on Tuesday against the Mets.

Just three seasons removed from winning the 2019 World Series, the Nationals held a major selloff at last year’s trade deadline that was highlighted by the departures of Max Scherzer and Trea Turner to the Los Angeles Dodgers and Kyle Schwarber to Boston.

The Nationals have now played the equivalent of an entire 162-game schedule since those moves going 53-109.

Cardinals: RHP Andre Pallante (3-4, 3.53 ERA) will start the final game of the series for St. Louis on Sunday. The 23-year-old rookie has thrown at least 96 pitches in each of his pervious three starts against NL East opponents.

Nationals: RHP Josiah Gray (7-6, 4.45 ERA) will make his first career start against the Cardinals. Gray has given up multiple home runs in each of his last three starts and six times in 18 games this season.