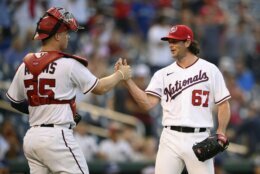 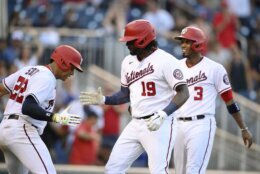 Juan Soto and Carter Kieboom also connected for Washington, which won back-to-back games for the first time since July 27-29. The Nationals had dropped 12 of 13 prior to the two-game interleague series.

Marcus Semien homered twice and Teoscar Hernández went deep for the fourth consecutive game for Toronto, which has lost five of six since reaching a season-high 11 games over .500 on Aug. 11.

Hand (5-7), who was acquired on July 29 as part of Washington’s sell-off at the trade deadline, entered with one on in the seventh and Toronto clinging to a 5-4 lead. After Soto walked, Bell hit a drive to right for his 20th homer. Two batters later, Kieboom tacked on a solo shot to left.

Mason Thompson (1-1) recorded the last two outs of the seventh for his first major league victory. Kyle Finnegan pitched 1 1/3 innings for his fourth save.

Gray has a 2.86 ERA in four starts with Washington. With Hernández’s homer in the second and Semien’s in the third, the seven earned runs he has allowed since the trade have come on solo homers.

Soto’s three-run homer in the first was all Washington could manage against José Berríos. He allowed five hits in five innings while striking out three. He has a 3.80 ERA in four starts since he was acquired in a July 30 trade with Minnesota.

Blue Jays: LHP Tim Mayza was activated from the injured list, and INF Kevin Smith was promoted from Triple-A Buffalo. RHP Alek Manoah was placed on the bereavement list and RHP Rafael Dolis was designated for assignment. Dolis was 2-3 with a 5.63 ERA in 39 games. … RHP Ross Stripling (oblique strain) won’t throw for the next 10 to 14 days. … Manager Charlie Montoyo said he anticipates C Danny Jansen (hamstring strain) will begin a rehabilitation assignment by next week.

Nationals: C Alex Avila (calf strains) ran some Wednesday. Manager Dave Martinez said Avila would throw to bases prior to Friday’s game. … RHP Austin Voth pitched a scoreless inning with two strikeouts Tuesday in his first rehab appearance at Triple-A Rochester. Voth has been on the COVID-19 injured list since July 29. … RHP Tanner Rainey, demoted to Rochester last month, reported pain in his side and was shut down. An MRI exam was negative.

Nationals: Open a three-city, nine-game road trip in Milwaukee on Friday. The Nationals have not announced their rotation plans.