Re: Opening Day — Nats (finally) ready to take on Braves 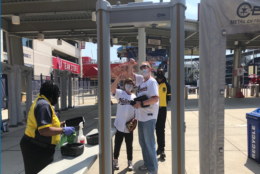 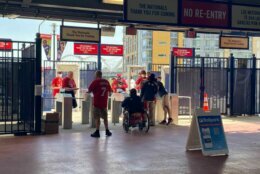 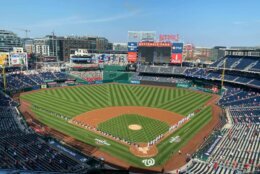 After coronavirus cases sidelined the Nationals last week, they’re finally ready to take on the Atlanta Braves on Tuesday at Nats Park.

COVID-19 safety protocols are limiting attendance to 5,000 fans, and they’re sitting in pod arrangements, with families and households together.

Among those fans: Luis Albisu, of Woodbridge, Virginia, who’s enough of a Nats fan to have headed to Florida for Spring Training. He was looking forward to seeing the new offensive talent the Nationals have in store — “and Ryan Zimmerman’s back.”

Art Gillory, of Alexandria, had a simple wish for the team: “I just wanna see ‘em hustle.”

Charlie Jackson, of D.C., who took his 10-year-old son John to the game, said they hadn’t seen a game live in 16 months. “It’s like Christmas morning.” John Jackson said, “It makes me feel awesome and basically I’m just excited for the year…because of the pandemic I didn’t think there was going to be any baseball this year.”

The team’s three-game series against the New York Mets was postponed. And they’ll still be shorthanded.

Eleven players are sitting out. Four tested positive for COVID-19.

The Nationals haven’t announced who is in isolation because of test results or which additional seven players are in quarantine because contact tracing determined they could have been exposed to the virus.

Fan capacity is sharply limited and crowds outside the park are sparse but those who are here are excited for the start of the Nats 2021 season ⁦@WTOP⁩ pic.twitter.com/pzUqKRTIYI

Asked whether it’s possible his Game 1 lineup for 2021 could feature up to five starting position players who weren’t expected to be there on Opening Day, manager Dave Martinez replied: “It is possible. We’re going to make it work.”

“Very rarely — probably never — have you played with the same team on the field the entire season. We kind of look at it like that,” said Ryan Zimmerman, the only first baseman to take part in drills Monday. “We have confidence in our whole roster. We have some guys that are going to step up and play well.”

Drew Smyly is set to start for the Braves, who were swept in three games by the Phillies to open 2021.