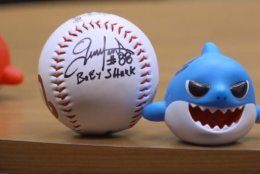 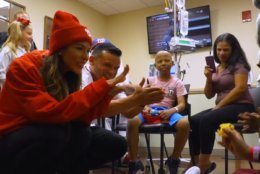 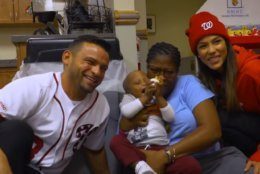 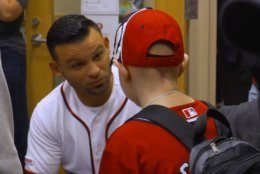 With the Washington Nationals knocking off the St. Louis Cardinals last week for the National League title, there was some free time for outfielder and pinch-hitter Gerardo Parra to visit baseball fans at Children’s National Hospital in the District.

Parra and his wife, Tania, met with pediatric cancer patients on Sunday and signed autographs, passed out toy sharks and sang along to his iconic walk-up tune.

“The ‘Baby Shark’ brings a lot of smiles to the kids,” Parra said after singing and taking photos with the children. “Today we saw everybody dancing to the ‘Baby Shark’ music, they’re so happy, everybody’s together and I’m so glad to bring out for the kids. Anytime we have the chance to come here, I want to come.”

He may not be a postseason hero like Howie Kendrick, Stephen Strasburg or Anthony Rendon, but Parra played a key role in the team’s late-spring resurgence.

Parra joined the Nats on May 9, and shortly thereafter, his impact was felt, as he hit an 8th-inning grand slam in Los Angeles to beat the Dodgers. Just a couple weeks later, the Nats turned their season around for good, posting one of the best records in baseball starting in late May.

Everything you need to know about the World Series

As the Nats turned around their season, Parra became a fan-favorite in Washington, after he started using the kid’s song “Baby Shark” as his walk-up music. While most players use a familiar pop music or hip-hop tune, Parra’s song endeared him to Washington fans, both youthful and elderly, and prompted an entire stadium to make a motion mimicking the jaws of a shark every time the 32-year-old came to bat or made a big play in the field.

The sight of 45,000 fans making the motion and singing along to the kids tune became one of the highlights of the Nationals’ season, which now sees them getting ready for Game 1 of the World Series, coming up Tuesday night in Houston against the American League Champion Astros. 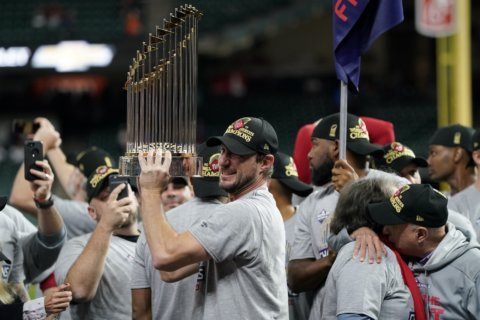 Nats World Series FAQ: Everything you need to know