Coronavirus News: The nuance of dealing with COVID-19 | New cases in Montgomery Co. | 'Is It Normal Yet' Podcast: A perfect storm | Latest cases in DC region
Home » Washington Nationals » Why 1 extra hour…

D.C. government and Exelon stepped in at the last second to extend Metro service for Thursday's NLDS Game, but will it be enough to allow Nationals fans to stay through the final out?
Listen now to WTOP News WTOP.com | Alexa | Google Home | WTOP App | 103.5 FM

WASHINGTON — Despite the announcement that Metro will stay open an extra hour to accommodate Game 5 of the National League Division Series between the Nationals and Chicago Cubs at Nationals Park, a single hour of extended service still very well may not allow enough time for fans to watch the entire game and catch their ride home.

D.C. Mayor Muriel Bowser announced Thursday morning, to the relief of concerned Nationals fans, that the city had reached a deal with Exelon to pay to keep the Metro system open later for the game.

Metro’s current Monday through Thursday schedule means that the last train going north out of the Navy Yard Station with available transfers to the rest of the system leaves the station at 11:22 p.m. (The Nationals promote the 11:02 p.m. train, but that is actually the second-to-last train of the night). With an extra hour, that pushes Thursday night’s last train to 12:22 a.m.

Last year, Game 5 of the NLDS between the Nats and Los Angeles Dodgers began at the same time as tonight’s scheduled start, 8:08 p.m. The game didn’t go extra innings nor featured rain delays, but lasted a full 4 hours and 32 minutes, with the last out recorded at 12:40 a.m.

That game featured 13 pitchers — six for the Dodgers, seven for the Nats — which may seem like a lot, but is par for the course in an all-hands-on-deck elimination game, especially one that was close throughout.

Game 5 between the Nats and St. Louis Cardinals in 2012 lasted 3 hours and 49 minutes; the Yankees-Indians Game 5 Wednesday night in Cleveland was just 3 hours and 38 minutes.

But if Thursday’s game at Nats Park unfolds in a similar fashion to last year’s, fans who expected the extended service to save them will be glancing at their watches in the late innings, still likely forced to leave before the final out. 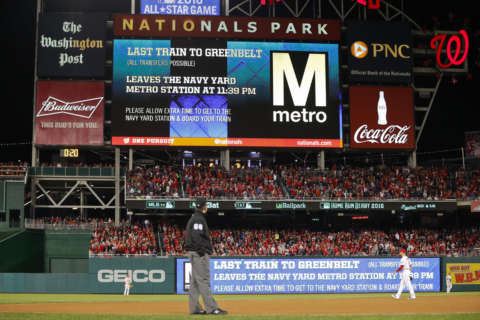