What April told us about the Nats

The Washington Nationals are sitting pretty after a record-setting offensive April, but looking ahead, they find themselves facing the same issues they did last year.
Listen now to WTOP News WTOP.com | Alexa | Google Home | WTOP App | 103.5 FM

WASHINGTON — Sunday was certainly a day for Nats fans to feel good.

Battering your biggest division rival 23-5 on a delirious spring afternoon in front of your home crowd engenders plenty of goodwill in the stands. It’s important to have those days and to relish them throughout the course of the 162-game marathon.

But it’s also important not to get too caught up in individual results in a game that is decided by large samples.

The 23-run outburst was the cherry on top of the Washington Nationals’ absurd offensive output in April, when they scored 170 runs in just 25 games — 29 more runs than the next closest team. Of course, they also allowed 122, their 4.88 runs per game allowed ranking fourth-worst in the NL and fifth-worst in baseball. We knew this team had the chance to be an offensive juggernaut, but with the quality of the starting rotation, both numbers are surprising.

We heard a lot about how hard Ryan Zimmerman was hitting the ball last year, despite his lack of results. While we’re still waiting to find out just how much exit velocity translates into success (the metric has only been tracked the last couple years), one stat that’s more reliable is batting average on balls in play, or BABIP.

Zimmerman’s career BABIP is .311, but the past two years, that number has been just .268 in 2015 and .248 in 2016. That indicates some measure of poor luck, especially if we believe that exit velocity has a direct correlation generally to batting average. Zimmerman is off to a ludicrous start this year, slashing .420/.458/.886, leading the league in a host of offensive categories. He’s homering at better than three times his career rate and is on pace to bash 71 dingers after totaling just 36 his last three seasons combined.

Zimmerman is prone to crazy offensive stretches. Over a 27-game stretch from June 24-July 24 in 2012, Zimmerman slashed .393/.447/.786 with 11 home runs. He batted .255 with 14 homers the rest of that season. In a 24-game stretch in early 2010, Zimmerman slashed .373/.424/.771 with eight home runs. The good news is that, while he was never able to maintain such torrid paces, the end results were two of his best years as a big leaguer, receiving MVP votes both seasons. After the last two years, Nationals fans would be thrilled with such a result.

Bryce Harper’s return to his MVP-level production shouldn’t be surprising, as he had a torrid spring and has generally crushed the ball while healthy. Meanwhile, Daniel Murphy’s repeat of his 2016 breakout is perhaps more surprising, but the peripheral numbers seem to back up the stats. Murphy’s walk rate is down slightly, but his BABIP is actually a little lower (. 337) than it was last year (. 348). Right now, he’s right on pace to repeat what he did last season.

Just like April’s offensive explosion, Anthony Rendon’s historic day — which gave him his first three home runs of the season and tripled his RBI total — helped cover up some of his early-season deficiencies. Rendon had just two extra-base hits before Sunday, one of the only Nationals struggling early at the plate.

Gio Gonzalez is off to a wonderful start, but it’s easy to forget that great Aprils are pretty par for his career. His career March/April ERA is 3.07, easily the best month in his career, pretty well in line with his numbers in a Nationals uniform. Since joining the Nats in 2012, Gonzalez is 12-7 with a 3.06 ERA (61 ER/179.2 IP).

Gonzalez’s career ERA by month balloons to 3.76 in May, 3.80 in June, 4.09 in July and 4.02 in August before dipping back to 3.34 in September/October. But if there’s good news to be read out of his hot start this year, it’s that it mirrors his good starts in both 2012 and 2013, his two best years in Washington in terms of ERA, innings pitched and strikeouts.

So, yes, a glass half-full approach paints a pretty picture one month in. But there are reasons to be cautious in your optimism.

In a sense, the Mets series highlighted just how much this Nationals team now resembles last year’s, both in good ways and bad. New York’s laughable laundry list of injuries seems to lengthen by the day, with Noah Syndergaard leaving Sunday’s game early and further putting their ability to compete in jeopardy. And while the Nationals are the only winning team in the division through the season’s first month, they still have the same deficiencies they did in 2016.

With starting center fielder and leadoff man Adam Eaton going down for the season with a torn ACL and meniscus Friday night, the lineup looks very familiar once again (with Matt Wieters taking Wilson Ramos’ place). And while Washington laughed its way to a blowout win Sunday, it dropped both Friday and Saturday’s games, with Max Scherzer and Stephen Strasburg each taking losses to the Yoenis Cespedes-less Mets. The bullpen didn’t factor officially in either decision, but yielded four runs in five total innings, allowing both games to get further away, preventing potential comebacks.

The relief corps remains a glaring question mark, with only Matt Albers’ 7.1 scoreless innings standing against a very unnerving set of numbers. The next best ERA among Nats relievers who have pitched more than once is Oliver Perez’s 3.86, with expected mainstays such as Blake Treinen (9.00), Joe Blanton (9.90) and Sammy Solis (8.31) posting particularly troubling numbers to date.

Before five scoreless innings in Sunday’s blowout, Washington’s bullpen ERA was a frightening 6.12, almost a run worse than any other National League team. Bullpens are the easiest part of a team to bolster on the fly midseason, and it’s hard to imagine this unit will look anything like it does now come October.

The Nats are in the driver’s seat to take home a second-straight NL East title and their fourth in six seasons. But one month in, we’re still asking the same questions we did last year and all offseason. There’s plenty of time left, but no answers yet. 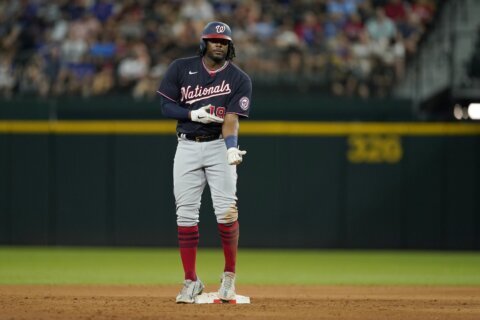 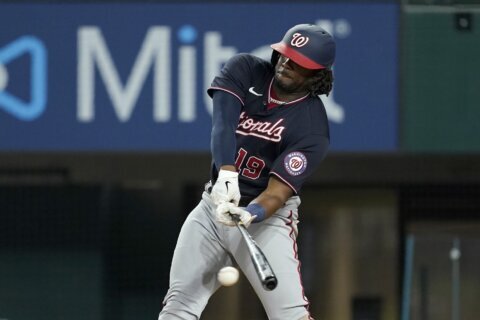 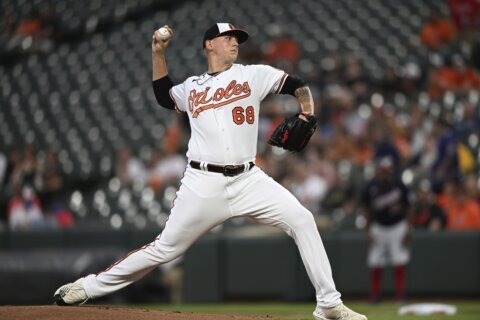