Led by MVP front-runner Elena Delle Donne, the Washington Mystics just wrapped the best season in franchise history and are looking to avenge their loss in last season's WNBA Finals.

If you’re feeling despair about the state of professional basketball in the District, you’re not giving the Washington Mystics enough attention.

With a decisive, crowd-pleasing 100-86 win Sunday over the Chicago Sky in their new home at the Entertainment & Sports Arena, the Mystics wrapped up the best regular season in franchise history and head to the WNBA Playoffs as the top seed.

But that undersells just how dominant they’ve been. The Mystics finished the season in rarefied air, outscoring their opponents by a full 12 points per game on average. That’s the highest margin of victory for a season in the league in nearly 20 years, topped only by the 1998 and 2000 Houston Comets. Both those Comets teams won titles, as have six of the top seven scoring margin teams in league history.

They’re led by Elena Delle Donne, who just posted the first 50/40/90 season in the history of the WNBA as she seeks her second league MVP Award, her first with the Mystics.

As strong as her traditional stats were, the advanced metrics love Delle Donne even more, as her 31.8 Player Efficiency Rating easily topped the league, with teammate Emma Meesseman second at 27.3. She also led the league in turnover percentage and win shares.

But she is hardly a one-woman show. Since returning from international duty for Belgium, Meesseman has been a terror in a two-bigs lineup alongside Delle Donne. In fact, she was on pace for a 50/40/90 season of her own, but came up short on shots made to qualify. In addition to Delle Donne’s 19.5 points per game, six others contributed at least nine points per game, providing a balanced attack.

The Mystics impressively finished the regular season with six straight wins, despite missing veteran point guard Kristi Toliver. Natasha Cloud has filled in capably out of her normal position, becoming the team’s all-time assists leader in the process. Toliver hasn’t played in more than a month after reinjuring her right knee, which she banged up early in the season, but the team hopes to have her back come the postseason.

As for the rest of the team, head coach Mike Thibault decided it was more important to keep the rust from building up than to let anybody rest on Sunday.

“Everybody talks about getting us rest — that would mean too many days off for some of our players. We’re going to have nine days as it is.”

The Mystics will host at least two home games at the ESA in the 2019 WNBA Playoffs, Tuesday, Sept. 17 and Thursday, Sept. 19, both at 8:30 p.m., in the semifinals. They’ll find out their opponent this weekend after the earlier rounds resolve.

The new arena has proved to be a fierce test for opponents. Washington went 14-2 in its new digs, including 10 straight home wins to close the season. The Mystics haven’t lost in D.C. since July 13, a game Delle Donne missed with a broken nose. They’ve needed to stay hot down the stretch to capture the top seed.

I think this is the home court advantage they were hoping for here pic.twitter.com/qQaoKm3pFQ

The team had the last two days off to rest, but will build back up again with practices Wednesday through Friday, including a planned scrimmage Thursday.

Then the work begins to try to avenge last year’s WNBA Finals loss and bring a championship home to D.C. 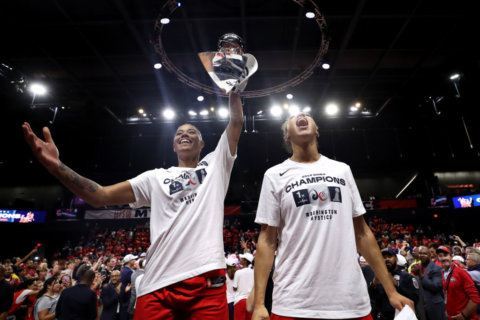 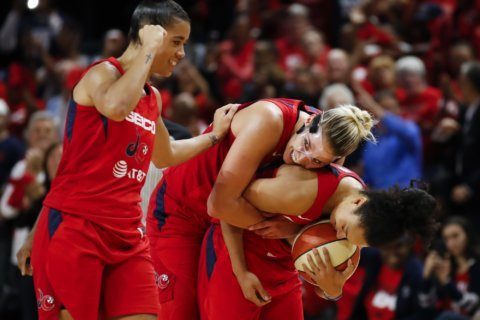